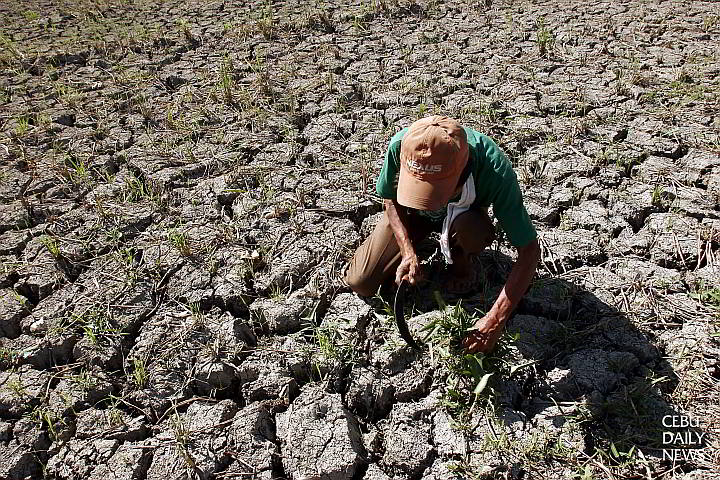 During a dry spell in April 2007, a farmer struggles to tend to his rice paddy in Carcar town, south Cebu.
(CDN FILE PHOTO)

The mild El Niño is already making its presence felt throughout Cebu province but its effect on farms is  not yet alarming, the provincial agriculturist said.

Dr. Roldan Saragena, in an interview, said that while he has not  received reports of rural crop damage, the province is ready to help farmers if the effects become dire in the coming months.

“If we ever start seeing its effects, which by far, we haven’t, then  farmers can always avail of our agri-fisheries program,” he said.

Saragena said that P10 million was allotted for the farmers’ insurance premium for this year.

Rice and corn are among the crops insured by the program, in partnership with the Philippine Crop Insurance Corp. (PCIC).

At least 31,000 farmers and fishermen are insured in Cebu province as of December 2014.

Saragena said seasoned farmers know how to cope with the summer heat, and are encouraged to plant root crops like peanuts, mung beans and kamote in case their main crop, like corn, is damaged.

“Farmers know that during the dry season, it is not wise to plant in large numbers,” he said.

Dring this time, Saragena said that farmers are already preparing for the first cropping season which falls in the second week of May.

As early as now, lands throughout the province are being tilled, he said.

He said farmers need to prepare the soil properly.

“Proper plowing exposes soil-thriving bacteria and fungus directly to the sun, killing them in the process,” said Saregena.

This will lessen the presence of pests and diseases in the farm, especially at the onset of first cropping, he added.

At least 30 drums were distributed to City of Naga. Other recipients include Carcar City, and the towns of Consolacion and Moalboal.

It’s getting to be hotter