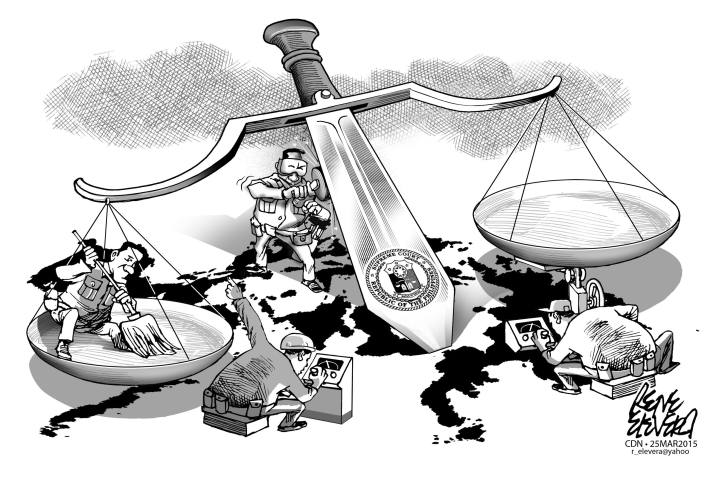 Chief Justice Ma. Lourdes Serreno’s campaign to restore public confidence in the judiciary is  not  new.

Barring any decision to run for public office or God forbid, any accidents, health problems or acts of violence directed at her, she has plenty of time to do just that.

The public’s low perception of the legal profession and the belief that the  justice system  can be bought or is skewed in favor of the powerful is a reality well steeped over decades even if the Aquino administration managed to restore some public confidence in its anti-corruption campaign.

The image is reinforced by commercial entertainment. Fans of  the late action icon Fernando Poe Jr. remember his battles against corrupt judges  acted out by another screen legend Eddie Garcia.

In foreign movies, there’s a long-running gag in which the corrupt lawyer or judge always gets killed first (see the very first Jurassic Park). Though it’s not always the case as evidenced by  John Grisham films, the public perception of lawyers and judges is  just about as cynical as one has of government.

Lawyers  usually end up serving in all three branches of government and often dominate leadership posts. Their expertise ,as per public perception, allows them to bend laws to their advantage.

The public may have gotten used by now to temporary restraining orders secured by  local and national government officials from the courts in order to stave off suspension.

In the US, TROs can be issued for a variety of purposes to stop a variety of persons such as jealous exes, stalkers and plagiarists. Though Filipinos love a good debate, we’re not as quick to sue those who offend us.

The biggest restriction is the finanical means to engage in a long legal battle to pin down criminal elements or corrupt public officials.

Lack of resources and awareness of one’s rights hobbles ordinary citizens in a the  pursuit of justice.

In many ways, the judicial system  still favors the rich over the poor and even the middle class.

No matter what  reforms she introduces to  improve the speed at which cases are disposed, Sereno  and her colleagues in the High Court must be frustrated by the meager budget given by Congress which limits them from building “modern, convenient” halls of justice like those supposedly planned for Cebu.

Despite having recently impeached chief justice, Filipinos should continue to support an independent judiciary that would countervail against the excesses of the executive and legislative branches of government.

Read Next
Capitol to save P18 million if stipends cut for fiscals, judges