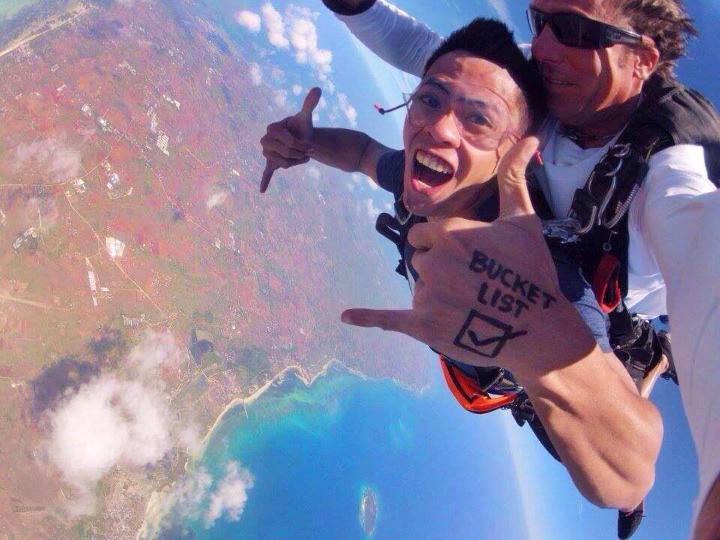 Sta. Fe Mayor Jose Esgana said while skydiving was  introduced only before the Holy Week by a group called Cebu Skydiving, the sport has drawn domestic and foreign participants who pay P18,000 each.

“Even celebrities like Raymart Santiago already experienced it here. Almost everyday there are tourists who want to try the activity,” the mayor told Cebu Daily News in a phone interview.

Known for its pristine white sand beaches and resorts, Sta. Fe town occupies the southeastern portion of Bantayan Island. The town includes the islands of Guintacan (or Kinatarcan), Hilantagaan and Hilantagaan  Diot.

Since the island’s airport and principal ferry port are both located within the town, Sta. Fe is considered the gateway to Bantayan and its islands.

Malfunction
Mayor Esgana also clarified last Saturday’s report about a Cessna plane rented by skydivers which supposedly crashed at the tip of the runway in Sta. Fe airport.

“There was no plane crash but an emergency landing just to be clear. An engine malfunctioned, a propeller was slightly damaged and there were no injuries,” Esgana said.

The plane’s pilot, Capt. Alvin Boyd Loreno of Pajac, Lapu-Lapu City brought an undetermined number of passengers for the skydiving activity and was about to land at the  airport in barangay Okoy when the engine malfunction happened at 4:45 p.m. last Saturday.

Despite the malfunction, Esgana said Loreno managed to land the plane on the runway.

Loreno was unhurt, though he appeared to have been in shock when he talked to Sta. Fe police.

Permit
The mayor said the incident won’t deter them from pursuing skydiving as a tourist attraction.

“Skydiving has a really big impact on our tourism industry here in the town. The activity can invite more tourists here,” Esgana said.

The mayor said Cebu Skydiving, a group of pilots and jumpers also called by Sta. Fe residents as Sta. Fe Skydive, secured a special permit from the the Civil Aviation Authority of the Philippines (CAAP) before Holy Week to offer skydiving services.

After their permit expires at the end of this month, Mayor Esgana said he will coordinate with the group and the Sta. Fe municipal council to reintroduce the activity with a set of guidelines.

“As of the moment, tourists don’t have to pay terminal fees yet because the council has no approved ordinance on the sport,” Esgana said.

“If we need emergency airlift just like patients who need to be sent to the city, they will help us,” the mayor said./With a report from Correspondent Jhunnex Napallacan