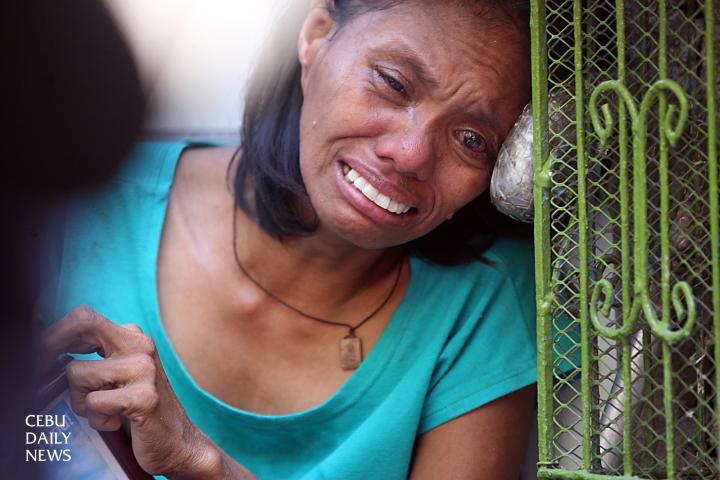 Noemi Mirabiles, mother of 11-year-old Chastity, at the cemetery were an autopsy was conducted. Yesterday she went to the PNP Child and Women Protection desk to give her statement to support the filing of a case against the Fuente police. (CDN PHOTO/ TONEE DESPOJO)

The National Bureau of Investigation in Central Visayas (NBI) is looking deeper into the death of 11-year-old street child Chastity Mirabiles alongside a parallel inquiry by at least two police groups.

Three NBI agents were put on the case following an autopsy on Wednesday that showed the child beggar died of “severe blunt injuries” in several parts of her body.

“The accusations are too serious to be ignored. The victim here is a child; a girl at that,” said NBI Assistant Director Augusto Isidoro.

He welcomed the police inquiry but said its neutrality may be doubted since Fuente station personnel were at the center of accusations of police brutality.

Another 11-year-old street child, now under the protection of Cebu city social workers, is the main witness of how Chastity was apprehended by a still unidentified Fuente policeman in the wee hours of Easter Sunday and brought to the station, where she was allegedly beaten.

READ: Fuente police say Chastity not among 14 kids rounded up in Easter

“I think it will be good for the police to step aside in this case because they might be accused of covering up fellow policemen. To avoid a cloud of doubt from the victim’s family and the public, they may want to inhibit themselves from this case,” Isidoro said.

The girl’s mother, Noemi Mirabiles, and grandfather Renato yesterday had their statement taken by the PNP Women and Children’s Protection Desk (WCPD).

Noemi stood by her statement to reporters that Fuente station commander Chief Inspector Wildemar Tiu and had tried to offer her money to settle the case a day after her daughter’s funeral.

Inspector Arieza Otida, head of the WCPD, said her office is looking into possible administrative liabilities since the NBI has entered the picture and will look into the criminal aspect.

She said  15 police officers were on duty on Easter Sunday, when the child was picked up.

The list will be sorted out to identify who were on field and who were in the assigned inside the precinct that day, when Chastity was rounded up with other street children about 2 a.m.

The ”pink blotter”of the Fuente station showed 14 minors were “rescued” from the street on Easter Sunday, April 5, but didn’t indicate Chastity’s name.

But Otiza said they would look deeper into what really happened since Fuente police earlier denied that street children had been apprehended that day.

“What we need are  sworn statements  and evidence for a case to be field,” she said.

The chief of the Fuente police station Chief Inspector Wildemar Tiu initially denied any knowledge or hand in the death of Chastity,  including his police team, then went on a one-month vacation leave last Monday.

His men yesterday went to the barangay hall of Sambag II to start their own investigation.

Separate teams from the Fuente police and the City Investigation and Detection Management (CIDMB) went  there to get an affidavit of a barangay councilor, who said that Chastity’s grandfather had first asked for help, suspecting that the child had been beaten up her her step-father.

At least five government bodies are looking into the street child’s death and the apparent role of the Fuente police station.

They are Cebu City’s Police Coordinating and Advisory Council (PCAC) under Vice Mayor Edgar Labella, the city’s Department of Social Welfare and Services (DSWS), the Commission on Human Rights (CHR) 7, the PNP Regional

Investigation and Detection Management Branch and now the NBI.

Isidoro said the NBI can start an inquiry ever without a formal complaint but that it would be better if the victim’s family comes forward to file one and cooperates.

“Of course, that person is presumed innocent until proven guilty. We will give them a chance to submit their counter-affidavit. But usually, respondents do not answer the allegations while the case is still being investigated by the NBI,” Isidoro said.

Isidoro said the NBI will ask Chastity’s 11-year-old companion to identify who mauled the girl from different photos of Fuente policemen.

The witness told social workers Chastity was given electric shock in the station where they were detained on April 5.

Chastity collapsed and died on the street the following day April 6, hours after she was released from police custody.

“Even if you are conducting rescue operations, policemen should never detain youth offenders,” he said.

Under Republic Act 9344 or the Juvenile Justice and Welfare Act of 2006, a child 15 years old or younger is exempt from criminal liability.

Read Next
Fuente police: Step father is a suspect