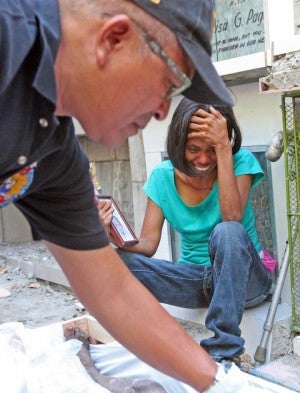 Noemi Mirabiles, mother of 11-year-old Chastity, cries as an NBI medico-legal officer conducts an autopsy of the girl’s remains which were exhumed from a niche in the Calamba cemetery. (CDN PHOTO/ TONEE DESPOJO)

An autopsy yesterday showed that  blunt force  used on  four parts of her body caused the death of 11-year-old Chastity Mirabiles.

The deep bruises or hematoma were proof of  “traumatic blunt injuries” on her left and right chest, right lower abdomen, and right elbow, said Dr. Rene Cam, medico-legal officer of the National Bureau of Investigation in Central Visayas (NBI 7).

“At her age, those injuries were very painful.   If one can’t bear the pain,  one would go into shock,” he said after an hour-long scrutiny of the child beggar’s cadaver.

The body was exhumed yesterday from its concrete niche in the Calamba cemetery in Cebu city, where Chastity was buried on April 12.

Her death has opened a scandal over alleged police brutality after Chastity was included in a police roundup of street children around Fuente Osmeña in the dawn hours of Easter Sunday.  She died the next day, April 6, collapsing on the street hours after her release.

READ: Fuente police say Chastity not among 14 kids rounded up in Easter

The Fuente station head Chief Inspector Wildemar Tiu and 15 of his staff on duty that day are under investigation for the child’s death.

At the cemetery, the child’s 42-year-old mother Noemi Mirabiles broke down in tears as the wooden coffin was opened by the NBI.

She insisted on staying close, despite the stench of the decomposing body.

MONEY OFFER
Noemi told reporters that Chief Inspector Tiu tried to offer her money to settle the case when she was summoned to appear in the Calamba barangay hall on April 13, a day after the burial.

Tiu, who denied having any hand in Chastity’s death, dropped out of sight after starting a month-long vacation last Monday.

The mother’s revelation yesterday was the first account given of the Fuente police chief allegedly trying to influence the victim’s family.

Noemi walks with a cane because of her disfigured feet. She and Chastity  took up begging outside the 7-eleven store near Fuente Osmeña after her live-in partner, a trisikad driver, lost his bicycle in a law enforcement violation in March.

Noemis said she was familiar with the Fuente police chief.

She said Chief Insp. Tiu and SPO1 Richard Catacutan of the Fuente police were both at the Calamba barangay hall, where she was summoned.

Catacutan did the talking, while his police chief just stood silently listening to their conversation, she said.

“There’s something the chief wants to give you.  Will you accept it?” Catacutan reportedly told the mother in Cebuano.
Noemi said she refused.

The NBI medico-legal officer said  “a blunt injury is caused by wood or first or anything that can cause a hematoma or the accumulation of blood outside the blood vessels.” “I can’t say that the girl was manhandled although there’s a possibility. Those who were with her (when she sustained those injuries) can best say what happened to the child,” said Cam.

Social workers in Cebu city brought out Chastity’s case and two other cases of physical abuse of minors taken into custody by the Fuente police station.

An 11-year-old witness, under their custody, described how Chastity was beaten in the station and even administered electric shock.

A stun gun could have been used by Cam said its difficult to prove that in the autopsy . He said he didn’t see an burns caused by high voltage.

He said he noticed an “adhesion” in Chastity’s right lung, which showed she may have suffered from a chronic illness like pulmonary tuberculosis or pneumonia but said this had nothing to do with the girl’s death.

Could Chastity have just stumbled to the ground and hit a hard object?

“That instance would not be compatible to the extent of the hematoma the girl sustained. Those injuries she had were definitely caused by a blunt object or force,” he said.

The girl’s mother Noemi said she had a dream about her daughter the other day.

She said Chastity was crying in her dream and ask for help.

“I promised that I will not stop until justice is served,” said the mother in Cebuano.

Chastity was the third of Noemi’s four children.