TAPS RUN DRY: MCWD output down by 10,000 cubic meters per day due to dry spell 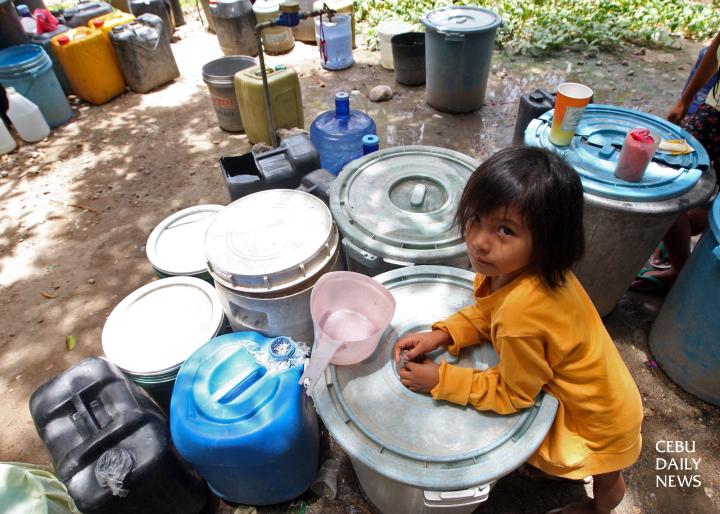 In the upland barangay of Maghaway, Talisay, a child watches over her family’s water rations. (CDN PHOTO/ TONEE DESPOJO)

Constancia Delima, 68, walks about 30 minutes from her home in an upland barangay in Talisay City to buy water from a neighbor.

She and her grandchildren have  been taking a bath and doing their laundry in her neighbor’s house  as well since  their tap ran dry almost a month ago.

Buying water at one  peso gallon is better than no supply.

(“It’s difficult  because the distance is far.  I’m limping and  still have to carry my laundry and a gallon of water back home.)

Like her home in Maghaway, other parts of Talisay City and Cebu city have been experiencing low water pressure or no water this summer.

The dry spell has made an impact on water production of the Metro Cebu Water District (MCWD) whose main production facility is in Talisay city.

As of yesterday, total water production was short of its target by 10,000 cubic meters.  The drop is  behind the district’s frequent public advisories to conserve water this summer.

Delima has a service water connection  from a cooperative supplied by MCWD. Her neighbor, the  Cuyos family, has water piped in from a natural spring in the next  barangay of Sandayong.

Summer plus the El Niño has left MCWD customers in parts of Talisay City and Cebu city with low pressure or no water at certain hours of the day.

MCWD’s Jaclupan weir or small dam  taps surface water which penetrates in the ground and is pumped out.

Barangay Maghaway, part of the watershed which produces the  resource, is about two kilometers from the city proper.

About 1,000 MCWD concessionaires there are affected and have to go to other barangays, like Linao, to fetch water, said barangay captain Victor Cabatas.

“It is really alarming because we only have one water source. I’m afraid that there may come a time when even that source will dry up,” he told CDN in a phone interview.

The natural spring in barangay Sandayong does not dry up even during summer, but Cabatas said it’s not enough to provide for all Maghaway residents.

Only eight out of 15 pumps are working.

Buhisan dam, which usually dries up in the summer,  produced only 3,200 cubic meters, nearly half of its maximum capacity of 6,000 cubic meters a day.

Cabatas said he has not asked  Talisay city officials for help yet.

Cynthia Barrit, head of the Talisay City Information Office, said the city government has been providing drums of water to families in Maghaway since April 17.

But she said only 20 families, who sought the city government’s help earlier, have been receiving a drum of water each.

“I would like to ask those who are in need of water to coordinate with City Hall  so we can act at once,” she told CDN over the phone.

Water is delivered on  Monday, Wednesday, and Friday, once in the morning and once in the afternoon by a firetruck.

In a previous advisory, MCWD said 12 barangays in Talisay have been suffering from low pressure to no water because of  low production from the Jaclupan facility. Parts of Cebu City have been likewise affected.

MCWD said it has three water tankers to deliver water to affected residents. But MCWD is not able to serve all areas daily.