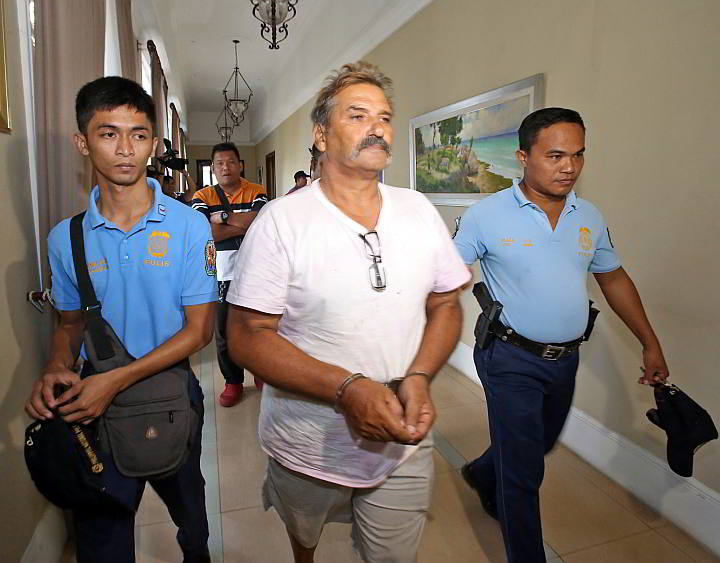 Australian Michael Refalo is escorted by police officers back to jail after being presented to Vice Gov. Agnes Magpale and representatives of the International Justice Mission (IJM) a day after his arrest. (CDN PHOTO/JUNJIE MENDOZA)

The 61-year-old Australian national charged with molesting female minors blamed his ex-girlfriend for spreading “lies about him.”

“I have not committed any crime. I did not do nothing. The allegations were spread by my ex-girlfriend,” a defiant Michael Refalo told the media as he was escorted by police out of the governor’s conference room yesterday.

Clad in a white T-shirt stained with faded red spots, gray shorts and slippers, a handcuffed Refalo stood stone-faced during a press conference.

He was arrested last Wednesday in San Francisco, Camotes Island.

After 20 minutes, Refalo spoke for about two minutes before he was escorted out of the room.

Refalo said his former girlfriend is now married and her husband should have been arrested.

“That man should be the one here, not me, you know,” he told reporters.

Refalo mentioned a girl who was kidnapped and that the couple still have her locked up many months later.

He didn’t clearly state who he was referring to as he was brought out of the room.

The suspect was arrested by police inside an Internet cafe based on an arrest warrant issued by Judge Antonio Marigomen of the Regional Trial Court Branch 61 in Bogo City.

Refalo has been charged with violating Republic Act 9208 or the Anti-Trafficking in Persons Act of 2003. The charges are non-bailable.

Refalo was brought to the Bogo City Court after the presentation.

“They identified 14 who fell victim to Mr. Refalo,” Tanagho said. Of that number, 12 were believed to be minors.

Last year, the Department of Social Welfare and Development (DSWD), IJM, and the social welfare office of Sta. Fe were able to locate two minors, ages 15 and 16.

One alleged that she was repeatedly molested by Refalo while the other girl claimed that Refalo tried to have sex with her.

Tanagho said Refalo invited his victims, aged 14 to 18 years old, to his house where he let him use his computer, gave them food and mobile phones in order to encourage them to come back.

“He offered the girls money, cell phones, or promises to spend for their schooling, in exchange for sex,” the lawyer said.

Refalo has been residing in Pooc, Sta. Fe for more than six years, but goes out of the country frequently.

He is said to own an internet cafe there and was believed by residents to be “untouchable.”

On March 17 last year, the task force conducted a preliminary investigation against Refalo before the Cebu Provincial Prosecutor’s Office.

A year after, charges of qualified human trafficking were filed against the Australian. Refalo was spotted in Poro, Camotes Island on May 7.

Magpale said the provincial government, through the Provincial Women’s Commission (PWC) and the Provincial Council for the Welfare of Children (PCWC), will care for the victims.

At present, the two minors who gave their testimonies are under the custody of DSWD.

The provincial government has been closely working with nongovernment organizations like IJM, and the Children’s Legal Bureau (CLB) in the campaign against human trafficking./With SiLliman University Intern Kateleen Marie C. Ogabang

Read Next
UV Green Lancers out to reclaim Cesafi glory