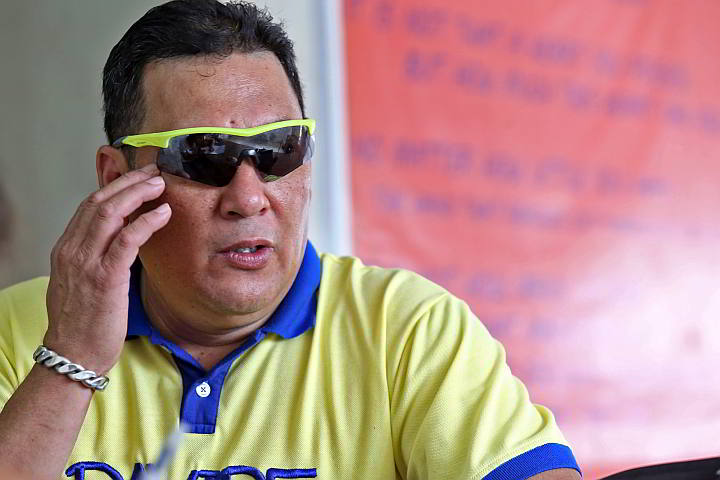 Jail was his second home for seven years.

The last thing  Marco Toral expected was to end up as a consultant on jail matters for the Cebu provincial government, and the top supervisor of the Cebu Provincial Detention and Rehabilitation Center (CPDRC) in the hilly barangay of Kalunasan in Cebu City.

Today Toral oversees the administration of jail personnel and implements programs for the rehabilitation of inmates.

“I know how it feels to be imprisoned,” he said, and offers himself as an example of the paradox of a man who has everything going for him in life, loses it and find his way back through the ordeal.

In 2002, Toral was arrested inside the Mandaue City Sports Complex for allegedly selling less than a gram of shabu to a female friend.   The woman had earlier tipped off the National Bureau of Investigation (NBI-7) about the sale.

Toral was first detained at the NBI stockade in Cebu City for 31 days.

Then he was committed to the Mandaue City Jail after drug charges were filed in court.

A charge of selling illegal drugs is  non-bailable under Republic Act 9165 or the Comprehensive Dangerous Drugs Act of 2002.

Toral was 36 years old when he was arrested. Life behind bars, he said, was a foretaste of hell.

“It’s a place you absolutely don’t want to be in. I was assigned to a cell of about 25 inmates. It was overcrowded. We slept on the floor side by side. It was extremely hot. Skin diseases were common. I wasn’t  spared,” Toral told CDN.

During the first year of his  imprisonment, his family life also crashed.  His  wife, the younger  sister of a prominent Cebu designer,  filed for the annulment of their marriage.

Their only son was in sixth grade.  The boy wasn’t allowed to visit his father in jail.

“It was the worst time in my whole life. I felt I was going insane. I even thought of committing suicide,” said Toral.

“I was so close to my wife and son. We used to go to Mass and dine out together every Sunday. I just couldn’t accept that I was put in prison. I was used to a comfortable life outside,” he added.

Toral is a scion of the wealthy Ouano clan, a  grandson of the late Ernesto Ouano, who owned the Ouano Wharf and  several businesses in Mandaue City.

A graduate of business management at the University of the Philippines Cebu, Toral helped run several family businesses before he was arrested.

Ironically,  his grandfather had donated 11 hectares of land to the government, including the lot where the Mandaue City Jail was built.

Before his arrest, Toral went to the United States as a blue-collar worker, taking on various jobs as a  janitor and even a warehouse helper. He eventually returned to Mandaue City at the request of his grandfather.

When Toral was arrested in 2002, his family withheld the information from his grandfather.

“They just told him that I was in the province because they were afraid of how the news would affect him,” he said.

COMFORT
While Toral did time in jail, he said it was his mother Edna who kept his hopes alive by frequently visiting him.

She even stopped using their air-conditioner at home to share his discomfort of living in the humid confines of a jail cell.

“Mama kept me going. She never failed to encourage me,” he said.

To keep his spirits from flagging, the mother wrote him a poem entitled  “In His Lifetime”: 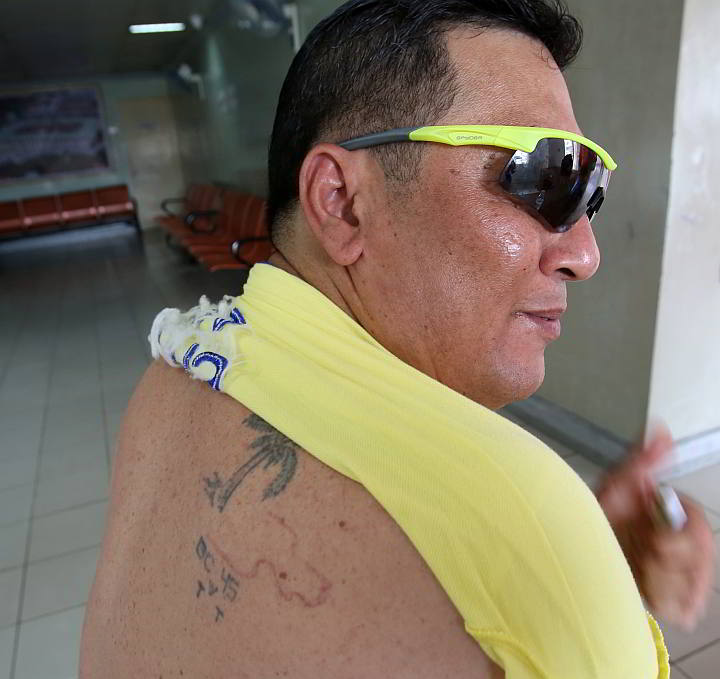 Marco Toral, provincial jail consultant of the Cebu Provincial Detaintion and Rehabilitation Center (CPDRC), rolls up his shirt to show proof of his seven years behind bars: his “BC .45” tattoo for Batang Cebu .45 inked by fellow inmates.
(CDN PHOTO/JUNJIE MENDOZA)

“It is not what there is for the eyes to see, but that you believe.

It is not what a heart possesses, but how much this heart can feel.

No matter how little you have, the hand that reaches out overflows with love,”  part of the poem read.

“It is not how many tears, but what made you cry.

It is not how heavy the suffering, but how you bear them.

It is not how saintly or sinful you are, but what made you become.

It is the not the legion of friends you collect, but how only a few can be that true to you.”

Toral said his mother, a Marian devotee who propagates the devotion to Our Lady of Manaoag in Cebu, urged him to never stop praying as an antidote to loneliness and anguish inside the jail.

“When I was young, I never really knew who God was because my mind was so occupied with many things. Yes, I was stubborn. But when I was imprisoned,  I started to learn who God is. I read the Bible. Then I never lost hope that one day I would step out of prison,” he said.

To give himself something to do, Toral suggested to the jail management that  prisoners be allowed  to do livelihood projects.

He contacted a friend, who owns a rattan furniture factory in Mandaue City.

With the permission of jail authorities, Toral and other inmates would smoothen  rattan poles with sandpaper.  Toral also introduced candle-making in the jail.

VERDICT
After three and a half years, a Regional Trial Court Judge handed down the verdict.

Toral was found guilty of selling, possessing and selling illegal drugs. He was sentenced to life imprisonment.

Toral contested his conviction before the Court of Appeals. While waiting for a ruling, he underwent a drug rehabilitation program.

He was transferred to the PNP-run Cebu City Treatment and Rehabilitation Center on Salinas Drive  (The site is now a corner of the I.T. Park in Lahug, Cebu City.)

Toral’s prayers were answered when in 2009, the Court of Appeals in Cebu reversed the ruling of the lower court.

He was acquitted of the charges. Toral was immediately released.

I’M SORRY
When he stepped out of jail, Toral immediately looked for his son who was already in third year college.

“When we met, I immediately held his hands and told him, ‘I’m so sorry, son. I have sinned against you. Please don’t follow what I did. I was a bad example for you,’” Toral recounted.

“And my son responded with, ‘It’s ok dad. You’re still my dad despite what happened.’ And then I cried very hard.”

Toral said he remains close to his son even after his marriage failed.

His son, now 25 years old, is a third year law student and does volunteer paralegal work in the CPDRC by helping monitor the progress of cases of inmates.

Toral said adjusting to mainstream life was not easy.

“I was so ashamed to face people when I stepped out of jail. So I decided to live at  a family-owned residence in the mountain. I concentrated on farming and running a piggery instead of settling down in the city,” he said.

They knew each other as schoolmates in UP Cebu. Toral was a classmate of the governor’s wife Jobella.

“The governor suddenly asked me if I could be the Capitol’s prison consultant. I  told him that my life was surrounded by intrigue. But the governor didn’t mind my past. I assured him of my loyalty,” Toral said.

Instead of putting him down, Toral said the governor gave him what he badly needed: support and acceptance.

Today as the Capitol’s jail consultant, Toral speaks directly to inmates and encourages them never to lose hope.

The CPDRC, like other jails in Cebu, is congested, but not as badly as the situation in Mandaue, where the facility has   over 1,000 inmates.

The Cebu provincial government has set aside P87 million to build an extension for the CPDRC to accommodate up to 1,000 inmates.

CPDRC’s claim to fame is the reputation of their “dancing inmates” who became a vi ral hit on the Internet when their choreographed dance of Michael Jackson’s music video “Thriller” was  posted on YouTube in 2007 by the prison consultant at that time, Byron Garcia.

They are also engaged in livelihood programs and run an in-house bakery.

It was started by an inmate Lito Granada, who used to work in a commercial bakery chain.

He first made “siakoy” to sell to fellow inmates, then trained some of them to handle various baking tasks when he prepared other products with an old oven in the jail.

Freshly-baked pan de sal, Spanish bread, Francis and cheese bread are sold at P2 each to inmates and P4 to outsiders.

About a thousand loaves,  pieces of bread and banana cakes are produced daily. The cakes are sold by the inmates at P10 per slice.

The bakeshop, which opened in August 2013, also accepts orders from outsiders, usually office employees at the Capitol and nearby banks.

The products are delivered by jail personnel using a motorcycle.

Aside from bread-making, the inmates also craft pen holders, artificial flowers made from recycled materials, and bags.

The CPDRC also partnered with the Technical Education and Skills Development Authority (TESDA) for vocational courses, and with the Department of Education (DepEd) for an Alternative Learning System (ALS) program to educate the inmates.

“I know how it feels to be imprisoned. I was once a prisoner. And it’s definitely very difficult,” Toral said.

But it was also inside the jail where he learned to persevere, listen to others and deepen his relationship with God.

“I hope, like me, detainees, once they will be freed, will be given a chance by society. Please do not judge us. Like the rest, we too, are human beings who are capable of changing our lives for the better,” he said.

Can you afford a lawyer?