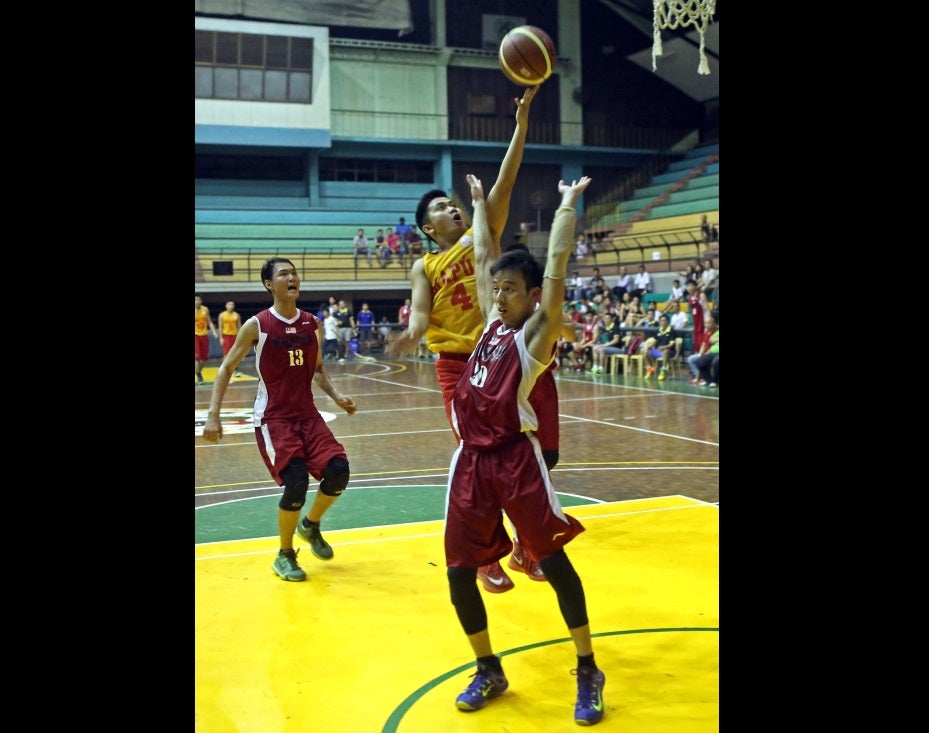 Exi Biteng of Mapua drives to the hoop against a Malaysian defender in yesterday’s Mayor’s Invitational Basketball Cup semifinal game at the University of San Carlos gym. (CDN PHOTO/LITO TECSON)

The University of San Carlos (USC) Warriors once again gave credence to the old basketball adage that height is might as they leaned on their towering frontcourt to tow them to an 86-72 victory over the relentless University of Cebu (UC) Webmasters in the semifinals of the 2015 Cebu City Mayor’s Cup Invitational Basketball Tournament yesterday at the USC Gym.

The victory placed the Cesafi runners-up in the winner-take-all championship game, where they will take on the Mapua Cardinals, who took care of Malaysia in the other semis pairing, 67-56.

The Cardinals were neck-and-neck with the Malaysians at the end of the third, 54-52, but ratcheted up their defense in the final frame and held their opponents to a mere four-point output to hack out the win.

In the main game, the Warriors turned on the heat on the Webmasters in the third canto where they uncorked a searing 17-2 blast that gave them a 63-49 cushion.

At the helm of the breakaway was import Shooster Olago, who tallied 14 of his 33 markers in that stretch.

But the Webmasters were far from done as they tightened up their defense to force several turnovers, which were converted into points by promising guard Shane Menina, whose triple pulled UC to within six, 72-78, with 1:20 to go.

But USC was not to be denied and closed out the game with makes from Kiefer Lim, Ian Tagapan and Victor Rabat.

Menina was the lone bright spot on offense for UC with 28 points, 17 of which came in the penultimate frame.

Read Next
Assorted guns, P1M worth of drugs seized in simultaneous CIDG 7 raids