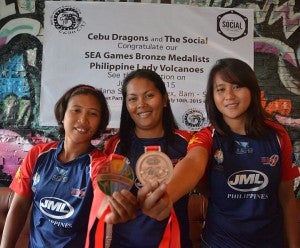 After helping the Philippine Rugby Team clinch a bronze medal in the recently concluded 28th South East Asian (SEA) Games in Singapore, three of the four Cebuana members of the Philippine Lady Volcanoes are set to strut their wares in Cebu.

The competition will feature foreign teams.

Last March, the three Cebuanas competed for the Philippine Lady Volcanoes and placed fourth in the Asian games qualifier held in India.

Five Cebuana players from the Cebu Lady Dragons were recruited  by the Philippine Lady Volcanoes but one got injured.

It was  the Philippine Lady Dragons’ initial foray   into the SEA Games. The Philippine Volcanoes men’s rugby team, on the other hand, bagged the competition’s gold medal.

On July 11, four teams from Hong Kong, two teams from Singapore, one from Malaysia, Thailand and Manila will battle for supremacy.

“We fought hard and we are still very proud because we were able to bring home a bronze medal. We were really targeting to win a gold medal but, unfortunately, we failed. We will do our best in the upcoming tournament on July to win the crown but we will still consider the tournament a friendly competition and more of a camaraderie among female rugby players,” said 28-year old Salinas.

Yu, a 23-year-old  student enrolled in a marketing course, said she is satisfied with their achievement in the SEA Games.

The Cebu Lady Dragons are also aiming to promote rugby in Cebu.

“Most of the female friends we have are really scared to engage in the sport but rugby really gave positive effects on our lives and it’s really a good way to become fit,” said the 26-year-old Ubaub.

Read Next
From SEAG to Olympics