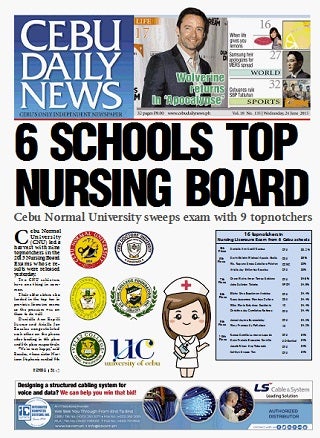 Cebu Normal University (CNU) led a harvest  with nine topnotchers in the  2015 Nursing Board Exams whose results were released yesterday.

Two CNU achievers have one thing in common.

Their elder sisters also landed in the top ten in previous licensure exams so the pressure was on them to do well.

Danielle Ann Kapili Suarez and Arielle Joy Rosales congratulated each other on the phone after landing in 4th place and 5th place respectively.

Suarez’s sister Laura had landed in 9th place in the 2012 board exam and is now  taking up a medical course.

Five other Cebu schools had graduates in the top ten of the May 2015 National Nursing Licensure Examinations.

Two each were from Cebu Doctors University (CDU) and Velez College and one topnotcher each came from the University of Cebu-Banilad, Velez College, St. Paul College Foundation Inc., and Cebu City Medical Center (CCMC).

The CNU graduates are among 16 nursing graduates from Cebu schools who garnered the ten highest places.

There were 9,707 successful examinees out of 17,891 who took the examination conducted by the Professional Regulations Commission.  The no. 1 spot went to a graduate of Bicol University – Legazpi with a rating of 86.4 percent.

Rosales, 20,  a resident of Banawa, Cebu City, who placed 5th said she was inspired by her sister to take up a nursing course and plans to either work abroad or pursue a degree in medicine.

Her father Artemio is a seaman while her mother Joselle is a former bank employee.

Another CNU achiever, 20-year-old Renee Camille Laguda didn’t regret following her parents’ advise to take up nursing even though she had wanted to study pscyhology or education.

Lagunda ranked 10th with an average rating of 84 percent.

“We were encouraged by our review center (Powerhouse) to excel. All I wanted was to pass the examination. I didn’t expect all of this,” she told Cebu Daily News.

Lagunda, who hails from barangay San Roque, Cebu City graduated last March. Her father works as part of a technical support support while her mother is a housewife. Lagunda said she has no plans to go abroad.

She credited hard work and her relationship to God for the good exam performance.

“Without God I really don’t know where I would be now,” she said.

Other Cebu graduates who topped the examination are Danielle Ann Kapili Suarez of CNU who landed in 4th place with a rating of 85.2 percent.

Aside from Laguda, others who landed in 10th place are Dann Francis Bacusmo Sarnillo of University of Cebu – Banilad , Jasafe Renon Ong Taborada and Kathlyn Orozco Tan of CNU with 84 percent.