Begging for water and bread 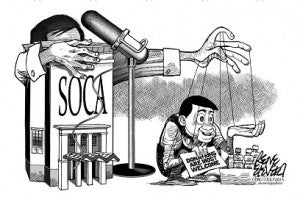 A sample of the solicitation letters supposedly released by Cebu City Mayor Michael Rama’s secretary Belinda Navasquez was posted on Facebook by a critic in the  Bando Osmena-Pundok Kauswagan (BO-PK).  This  spells trouble for Rama.

Anti-graft laws reject solicitations by public  servants.  It’s listed as one of the prohibited acts that violate the Code of Conduct and Ethical Standards of Public Officials and Employees under Republic Act 6713.

Yes, it’s common for local governments to lean on private entities to cough up “assistance” in events from founding anniversaries to fiestas. But common practice doesn’t make the solicitation  any less unlawful.

Bread and bottled water look like harmless subjects of requests. But addressed on official stationery with the seal of Cebu City and the name of the mayor, the request comes with an unspoken warning: Give it up or else.

The party requesting happens to be the office that issues a  business permit or ensures that an enterprise stays  listed as a City Hall supplier.

It is this kind of silent pressure that forms the abuse which RA 6713 seeks  to stamp out.

If the local government has a legitimate need to acquire bread and bottled water, it should purchase the goods and pay for it.  That’s the decent way of transacting with a tax-paying business entity.

Is City Hall a calamity victim that requires the generosity of commercial suppliers to feed its public school pupils who were instructed to come out and perform field drills for June 12 Independence Day?

The sample letter posted by Councilor Sisinio Andales asked for a donation of bottled mineral water for those attending the mayor’s State of the City Address (SOCA) set for July 4.

Is the distribution of mineral water to the audience of  a public speech scheduled on a weekend a  “need”? Does City Hall need to supply drinking water to ensure a crowd?

Navasquez was honest in confirming that she had signed solicitation letters for the June 12 event.  She said the bakery firm Gardenia and supplier of Nature’s Spring water were ready to donate the supplies, and were just asking for a “letter”.

If that’s the case,  the letter should be a statement of gratitude acknowledging their generous donation.

City Hall has to be careful  in making denials of these  written “requests”.  There are probably other letters out there waiting to surface as proof that   soliciting donations is a familiar practice.

Saying the goods are for a “public” purpose and not for personal benefit is a lame defense.

Every public official claims that his acts are  for the public good.  Activities in aid of reelection are for the “public good” in the eyes of the incumbent.  The  law  banning solicitation does not qualify motives.

It’s time for the Visayas Ombudsman to investigate and make things clear.