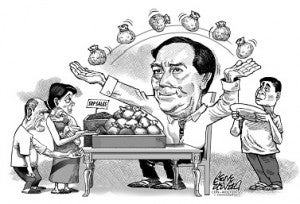 As Cebu City Mayor Michael Rama delivers the last State of the City Address (SOCA) of his second term in office, we are reminded anew of what his predecessor, former congressman and mayor Tomas Osmeña said during a guest spot at the weekly 888 News Forum during the 2013 elections.

In running for mayor against his former ally, Osmeña stressed that he wanted to protect the South Road Properties (SRP) for the  future of city residents. “That’s all we have. After that, there is no more SRP,” he told  reporters.

As the chief architect of  the SRP dream,  Osmeña’s reminder/warning acquires relevance in light of last Tuesday’s successful joint SM-Ayala bid of more than P10 billion for 26 hectares of reclaimed land near the  San Pedro Calungsod templete.

The property drew a bid almost double the floor price of P20,000 per square meter.   No one can call that a “fire sale” of the city’s patrimony.  The purchase is being made by premium players in urban development as well.

In one day, the Cebu City government’s coffers earned more than P1 billion cash from the 10 percent security bond paid  by the two major developers, who joined forces to develop the land.

If the Committee on Awards finds their papers in order, Cebu City expects to collect at least P2 billion  a year for the next three years from the joint venture.

Another winning bidder, Filinvest Land Inc., posted the highest bid at more than P6 billion for two parcels of land at the SRP.

The photos of self-congratulatory Cebu City officials smiling ear to ear as they posed with the P1.18 billion check next to SM and Ayala officials may raise some eyebrows.

But who wouldn’t be jubilant?  (When  was the last time you   held a  manager’s check for P1 billion in your hand?)

With the windfall, Cebu City residents should be able to look forward to – and demand ––  public services that didn’t get delivered before.

With the windfall, Mayor Rama has the benefit of excellent timing – good news to report in his State of the City Address today.

Ahead is the question of  whether the Rama administration or anyone who could succeed him as mayor  can demonstrate the efficient and honest use of all that money to deliver  projects and services that Cebu City residents have been deprived of for over a decade.

The mayor’s output and actions, not words, are worth watching more than a one-day campaign speech. For now, let’s hear what he has to say.