Lorega trader shot dead in family van; Gunmen waited for kids to get off 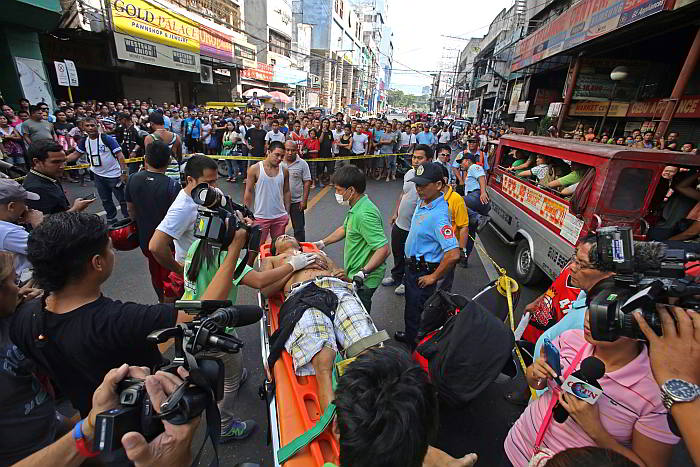 Gunshot victim Jaime Villaceren is brought on a gurney to a waiting ambulance by Basak Pardo Emergency Rescue workers in Osmeña Boulevard, where a crowd gathers. (CDN PHOTO/ LITO TECSON)

Where were the police?” asked  a dismayed Cebu City Mayor Michael Rama after a businessman was shot dead in a family van in the city’s busiest downtown junction yesterday morning.

The van had stopped for a red light  at 7:25 a.m. when two men on a motorbike drove up and fired shots at the driver, 36-year-old businessman Jaime Villaceran.

The victim, who had just dropped off his two daughters at school, tried to drive off but his van rammed a jeepney in front of him.

Police said the gunman opened the door of the vehicle, and finished off Villaceran with more shots.

Police said Villaceran, a resident of barangay Lorega San Miguel, was engaged in money lending, and selling chicharon and hogs.

Homicide investigators said Villaceran was also on their watch list of drug suspects.

“We’re giving the illegal drug angle priority because we have prior information that we will look into,” said SP04 Alex Dacua.

Mayor Rama was not satisfied, saying police visibility in Colon Street has always been a priority to deter crime.

“How did it happen? Look for the culprit!” the mayor ordered city police.

“Ëven if drugs are involved, that’s not an excuse. There’s a crime,” he added.

Inside a console box of Villaceran’s Toyota Grandia were four firearms —  two .38 caliber pistols, a .45 caliber Colt handgun and a .25 caliber revolver, each with full ammunition. 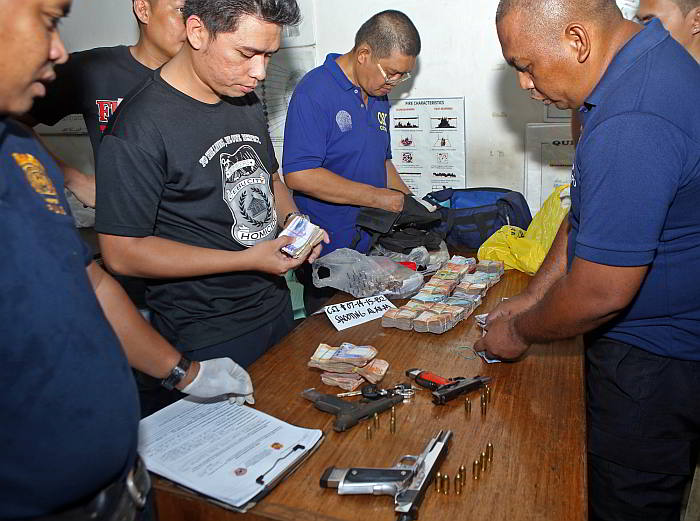 A bag in the passenger seat contained P327,000 cash and notebooks.

SPO4 Dacua said they would investigate why the victim was carrying several guns.

Supt. Romeo Santander, chief of the City Intelligence Branch, confirmed that  Villaceran was in the police watch list of  suspects involved in illegal drug trade but declined to give details pending investigation of the ambush.

Villaceran was driving the family van  with plate number AAE 8439 and had just dropped off two of his grade school children at the University of Cebu on Osmeña Boulevard.

He proceeded to Colon Street where the ambush took place a few meters away.

The assailants, who wore helmets, fled to the Carbon area and disappeared. Policemen conducted checkpoints but failed to arrest the suspects.

Dacua said the gunmen could be professional hired killers based on how they executed the murder: the gunmen waited until after the children disembarked from the van, and then made sure the target was killed.

A bullet hole in the tinted windshield of the van and three smaller ones in the driver’s side showed the assailants were aiming for Villaceran’s head.

The businessman was declared dead at Velez Hospital after sustaining fatal gunshot wounds in the chest, stomach and arms.

Police are trying to get copies of CCTV footage owned by establishments in the area.

The gun attack caused major traffic congestion downtown for one and half hours but police said there were no witnesses who stepped up to describe what happened.

“Most of the witnesses didn’t want to testify.  For the meantime, we will coordinate with City Hall for access to CCTVs in the area,” said Senior Inspector Elisandro Quijano.

Lanes of Osmena Boulevard from Sanciangko to Colon streets had to be closed.

The intersection was blocked off while personnel from the Crime Scene Investigation checked for evidence in the area.

Six empty shells of a .45 caliber gun and two deformed slugs were found at the scene. 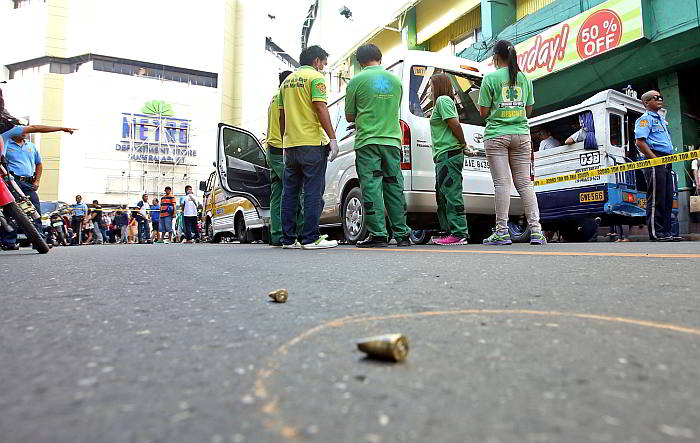 Empty shells of an .45 caliber scatter on the road near the crime scene in Osmeña Boulevard. (CDN PHOTO/ LITO TECSON)

Read Next
Pope to send envoy for IEC in Cebu