Record high 2,615 in Cebu for Ironman

With overcast skies and prayers for fine weather, organizers of the Ironman 70.3 look forward to a smooth triathlon in Cebu this weekend.

Up to the last minute, coordination was being done to improve the bike race route in Mandaue City.

Ongoing construction in a 100-meter section of Plaridel Street would reduce the four-lane road to two, which caught organizers by surprise.

Race director Neville Manaois of Sunrise Events Inc. (SEI) thanked the Department of Public Works and Highways (DPWH) for helping clear debris from the road and covering potholes along the 90-kilometer bike route that stretches through four cities of Lapu-Lapu, Mandaue, Cebu and Talisay.

“DPWH will stop the ongoing road construction in Plaridel Street momentarily this weekend. They said that they will remove the construction equipment there. They will also help us put up cordons, markings and warning signs in the area for the safety of the participants,” he said.

Since safety is the top priority, Manaois said they are briefing athletes to take extra care in navigating this section.

“We have to tell others that the area is in bad condition,” Manaois added.

Overall, Manaois said the bike route this year is better than last year’s considering that  S.Osmeña Road in Cebu City has already been repaved. 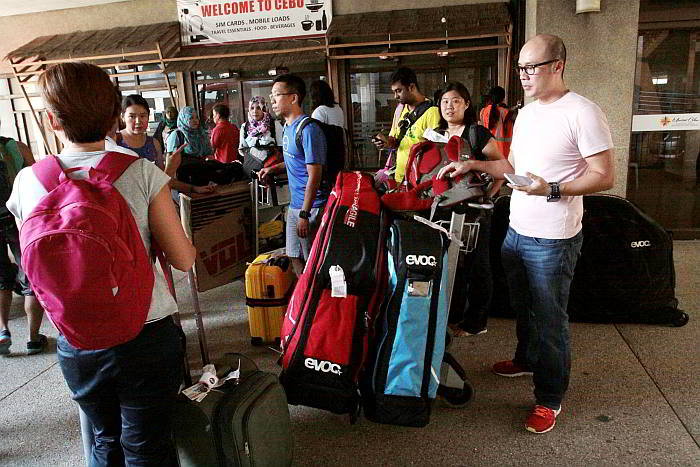 Around 180 children aged 6 to 14 will will be competing in the Alaska IronKids on Saturday.

A record high of  2,618 triathletes have signed up for the Cobra Ironman 70.3 Philippines on Sunday with  races that start and finish at the Shangri-la’s Mactan Resort and Spa. 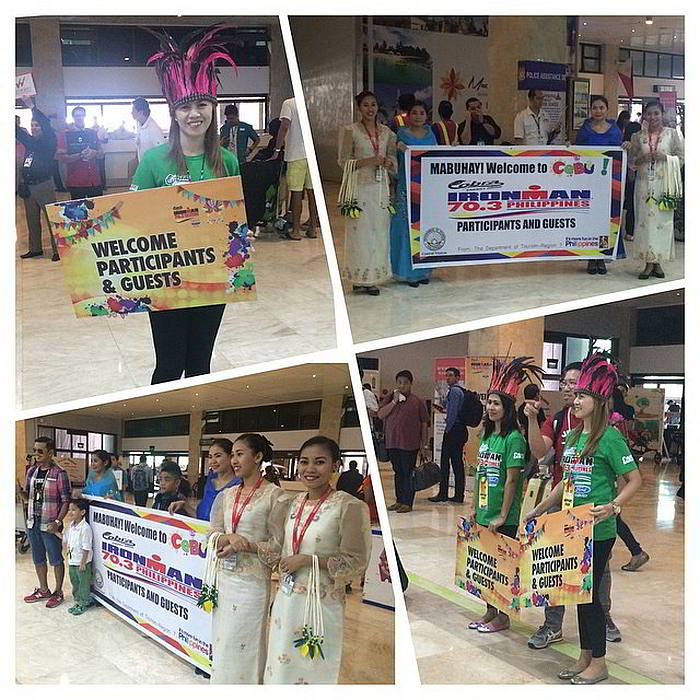 a colorful Sinulog welcome is part of the event’s festival theme this year. (Photo grabbed from Facebook page of Ironman Philippines)

About 200 of them are foreign participants.

Cebu is hosting the international sports event for the fourth straight year with the festival theme of the Sinulog.

Athletes have started arriving in the Mactan international airport, where drum beats and Sinulog dancers welcomed a batch of them on Wednesday.

Cebu has been experiencing sudden weather changes from sunny days to  instant thunderstorms.

Last Monday, an afternoon downpour caused flooding in S. Osmeña Road, a main part of the bike route for the Ironman race.

Princess Galura, project director of SEI, said Provincial Administrator Mark Tolentino assured that engineers of the province will intervene and help clear up Plaridel Street in the next 24 hours.

DPWH and local governments will join forces in patching holes until early morning on Sunday, the main event of the Ironman 70.3.

The bike out is the longest course in the swim-bike-race triathlon, “the heart of the race”, and takes four and half hours to finish.

She said Philippine organizers are hoping to improve the ranking of Ironman Philippines, which was rated second in world rankings in 2013, but dropped last year because of the condition of the bike route.

“If the bike run is an unpleasant experience that is what will stick in the minds of participants,” she said.

Cebu Provincial Engineer Hector Jamora talked with the DPWH 6th district which “assured Plaridel street will be paved and passable.”

A road sweep will start Saturday with clearing work conduct 24/7.

Race director Manaois said contingency plans are in place  in case of  bad weather this weekend.

In 2013, a morning downpour and strong winds forced them to cancel some races of the  IronKids at the last minute.

“We don’t cancel a race immediately. We have a team that coordinates with different LGU’s and weather agencies. An officiating team will decide whether to cancel the race or push through with it,” said Manaois.

If the sea is too rough in the waters off Shangrila, and the swim is canceled, they will do a duathlon with run-bike-run series.

If a heavy rain floods the bike route,  a rerouting scheme is ready.

“We are praying hard for good weather. We offered eggs to the Carmelite sisters here in Cebu and some churches in Manila. We’ve been lucky for the past few years and I hope that it will continue.

Local celebrities will be joining the race on Sunday.

Castillo’s girlfriend Sarah Geronimo and Kaye Abad will also be present on Sunday.

She said that people can already notice congestion at the airport and hopes that Cebuanos will consider this a a happy race.

“You can let them see the best of Cebu,” she said, adding that organizers have already ordered thousands of Cebu mangoes. /with Mary Claire Catado

Read Next
Smooth traffic flow on Day 2 of rerouting