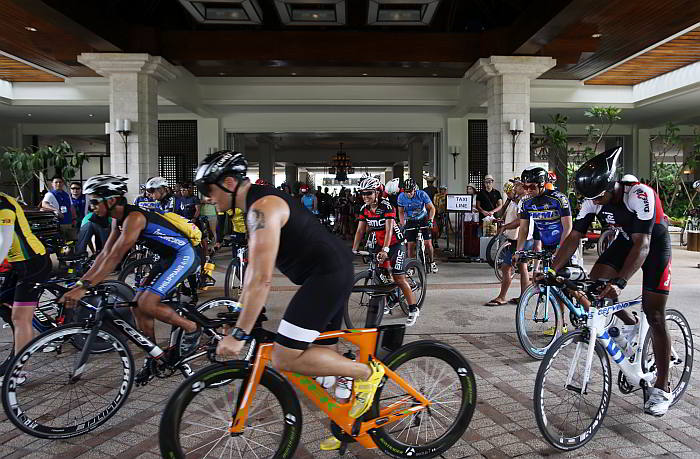 Foreign and local athletes prepare to leave the lobby of Shangri-la Mactan for their final bike out. (CDN PHOTO/ JUNJIE MENDOZA)

Road closures will take effect from 5 a.m. to 2 p.m. on Sunday in major streets of  Lapu-Lapu, Mandaue, Cebu and Talisay cities along the race route of  the Ironman 70.3 Philippines

The 90-kilometer bike race will kick off at the Shangri-La’s Mactan Resort and Spa, cross to Mandaue City and proceed to Cebu City and finally to Talisay City through the South Road Properties (SRP) before going back to Mactan.

Nearly 2,000 security personnel,  barangay tanods and students will be  fielded along the race route to secure athletes and guests.

The entire  stretch of S. Osmeña Road in the North Reclamation Area  will be closed for half of the day starting from the boundary between Cebu and Mandaue cities until the Cebu South Coastal Road (CSCR) tunnel.

Crossing S. Osmeña Road will be strictly prohibited during the race.

People and vehicles will have to go all the way to Plaza Independencia to get to the other side.

About 180 traffic personnel will  be fielded  in interesections of Cebu City to manage  traffic in areas identified as alternate routes.

Steel railings will be put up in some junctions.

“We will do our best so that they won’t have to experience traffic,” said Jonathan Tumulak, , Cebu City Traffic Operations Management (Citom) operations chief Joy Tumulak said.

Vehicles going to the port area can pass through Legazpi Extension going to Arellano Blvd. and proceed to Pier 1, 2, 3 and 4.

Those headed to the Mactan Cebu International Airport  can use the alternative roads of M.J. Cuenco Ave. and Escario Street.

Policemen and  barangay tanods will be deployed along the race route reinforced by  around 3,000 cadets and National Service Training Program (NSTP) students  for crowd control.

“We already had a workshop with them last week on how to enforce (crowd control) during the event. They are fully aware of their duties along the route,” said Tinagao barangay captain Joel

Garganera, pointman of the city government for traffic, security,  medical and crowd control.

Ambulances will be stationed near SM, the SRP tunnel,  Plaza Sugbo in the SRP and on the bridge linking Talisay and Cebu cities, said Councilor Dave Tumulak.

In Mactan, Lapu-lapu police were on “heightened alert” since  July 29.

Radoc said a total of 1,673 personnel from the police, Regional Maritime Unit, Air Force and Navy as well as barangay watchmen and student cadets will be deployed for the triathlon.

In Mandaue City, the Department of Public Works and Highways (DPWH) is working overtime to finish two lanes of Plaridel Street by tonight for the bike race on Sunday.

“We will finish it. By Sunday, it will be ready for the race,” said Engr. Renault Ricardo, assistant district engineer of the DPWH 6th District Engineering Office.

He said they have been patching  potholes on the road from 7 a.m. to 2 a.m. the next day.

A total  of 2,618 athletes will join the Ironman triathlon on Sunday while 174 kids, aged 6 to 14, will be joining the Alaska IronKids event today.