2016 Ironman Asia Pacific Championship to be hosted in Cebu 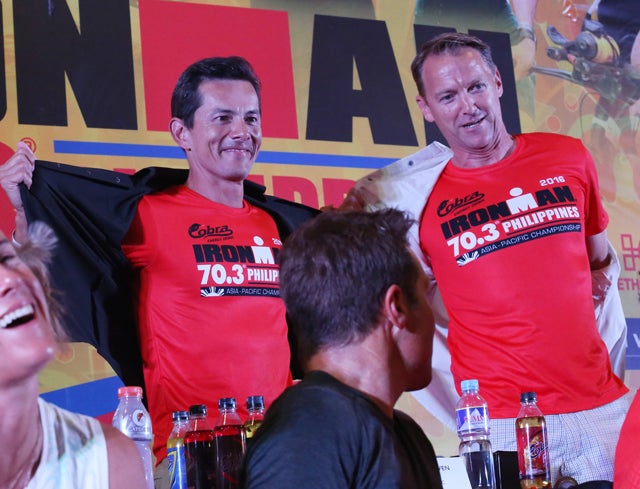 Wilfred Steven Uytensu and Geoff Meyer of the World Triathlon Corporation remove their polo shirts to show T-shirts already printed with the upcoming event Ironman 70.3 Philippine Asia-Pacific Championship 2016 to be held in Cebu. The happy news was announced at the Meet the Pros press conference in Shangri-la Mactan. CDN PHOTO/JUNJIE MENDOZA

Was it tropical fun?

The warm Pinoy welcome in a luxe island resort for four straight years?

Did the cheering crowds along the bike-marathon race routes  make a difference? Or the active partnership of local governments in securing venues?

These are some factors organizers of the Ironman 70.3 Philippines say keep them returning to Cebu each year since 2012.

Cebu will be in the spotlight again of the international triathlon scene with the announcement yesterday by  World Triathlon Corp. CEO Geof Meyers that Philippine organizers won the bid to host the coveted Ironman 70.3 Asia Pacific Championship in 2016 with Cebu as the venue.

“It was a clear choice for us because we’ve seen the phenomenal  effect of triathlon in the Philippines particularly in the Cobra Ironman 70.3. We are really excited for this race and expect the number of professional triathletes to double. The race will be covered live around the world,” said Meyers in an interview.

He announced the good news at a press conference in the white tent marquee of the Shangri-la’s Mactan Resort and Spa, two days ahead of Sunday’s 2015 Cobra Ironman 70.3 Philippines.

Meyers said he was impressed by the growth of triathlon sports in the Philippines.  From 450 athletes  seven years ago, the number of participants has increased almost six-fold.

This Sunday, a record high number of 2,615 participants from 52 countries  will test their endurance in swimming, biking and running this weekend with a 90-kilometer bike course that runs through cities of Lapu-Lapu, Mandaue, Cebu and Talisay.

Top finishers will qualify for slots in the next level of the competition.

The Philippines beat Malaysia, Thailand, Australia and New Zealand in bidding for the privilege to  host the the Asia Pacific Championships on Aug. 7, 2016.

The bid was made by Sunrise Events Inc. (SEI) led by Wilfred Steven Uytensu Jr., CEO of Alaska Milk Corp.

“When we first talked about bringing the Ironman here, people said it couldn’t happen, it wouldn’t be done because the Philippines wasn’t capable of hosting a world-class event.

“We fast forward now seven years later with an outstanding cast of pros, an event that we started with just 450 athletes and now 2,600-plus athletes.  Slots were sold out in 40 minutes this year with 500 people on the waiting list,” Uytengsu told CDN.

The Asia-Pacific Championship will offer US $75,000 in prize money for winning triathletes in the professional division while 30 slots will be up for grabs in the age groupers for the 2017 Ironman  70.3 World Championships.

“After Fred(Uytengsu) proposed their bid to host the race, we already anticipated that they’ll win the bidding and no doubt they will surely get to host it because one of our main goal is that we want the race to grow in the Asian region,” Meyers of WTC told Cebu Daily News.

WTC owns the franchise for the Ironman triathlons mounted around the world.

Uytengsu said winning the bid to stage the Asia Pacific championships was “a testament really to the faith that Ironman  placed in us here at Sunrise Events  and the Philippines. We are extremely proud of the Province of Cebu and Lapu-Lapu city in particular. The impact this will have is not just economic.”

Uytengsu estimated that in one weekend, staging the Asia Pacific championships would bring in $7 million to $8 million for  the local economy.

“Now, the best is yet to come. So thank you very much and I promise you, we will make you proud,” said Uytengsu after the WTC announcement.

Uytengsu said said he and his staff were humbled and motivated at the same time to improve the race experience.

Since the road surface of the 90-km bike route has been a perennial concern for Ironman organizers, with potholes and diggings posing safety issues, Uytengsu said that local governments and the

Department of Public Works and Highways (DPWH) have to improve the road network in Cebu.

In winning the bid, the Philippine organizers had to prove the capability of hosting grand races with good accommodations, infrastructure and financial resources.

Despite the road flaws, the Cobra Ironman 70.3 in Cebu was rated second in world rankings in 2013 next to Canada as a host based on feedback of participating athletes.

The ranking dropped lower last year due in part to the recurring road quality issues.

The bike race, which has the longest distance of the triathlon, is considered “the heart of the race”.

Princess Galura, SEI’s project director and key woman behind the organizing team,  said Cebu was an ideal venue for many reasons –  the cooperation of LGUs, hospitality of Cebuanos, hotel-resort accommodations, ease of airport access, the cheering spectators that boost the morale of athletes, and even the food.

The fun factor of the Ironman 70.3 was emphasized this year with the festival theme of the Sinulog, with costumed dancers and the drum beat of the Sinulog adding life and color to the event.

“We will do what we normally do, assess everything after the race and look at improvements. We will not rest until we make sure  we can do better the next year. There’s no pressure if we continue what we do well. We do our best with the help especially of the LGUs,” Galura said.

Next year marks the fifth year anniversary of Cobra Energy Drink Ironman 70.3 Philippines in Cebu and SEI’s eighth anniversary with the Ironman franchise.

Read Next
Cobonpue’s medals: Finish a race on top of a hill