‘SEE YOU AT THE FINISH LINE’ 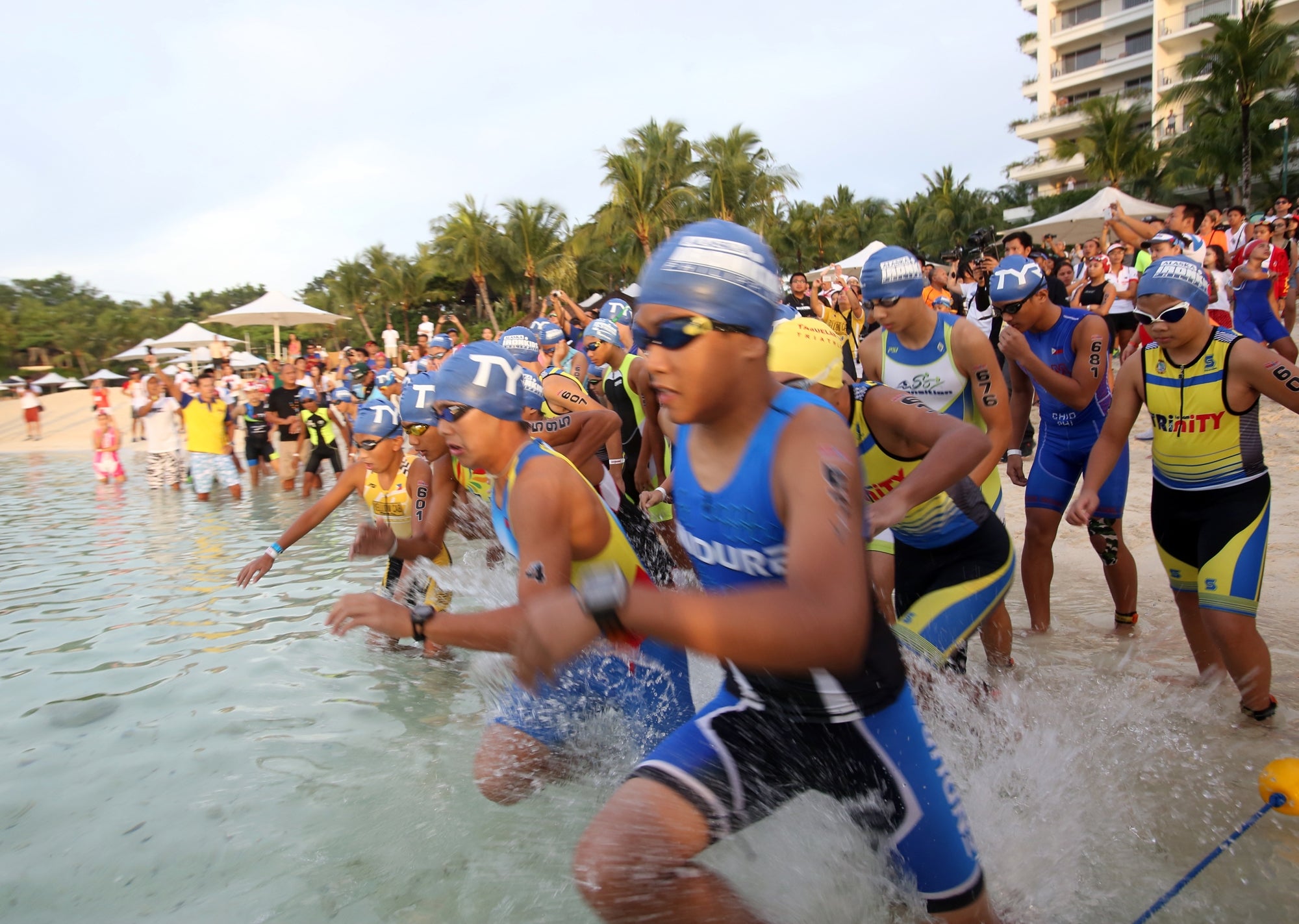 Triathletes in the Ironkids 13 to 14-year-old boy’s division sprint to the water at the Shangri-la’s Mactan resort to begin their 400-meter swim leg. (CDN PHOTO/ JUNJIE MENDOZA)

Over 2,600 triathletes will test the limits of their endurance – and the weather – as the Ironman 70.3 race gets off to an early morning start today in Cebu.

Weathermen said there was a slight chance of rain before noon but no storm on the horizon.

“It isn’t likely that we would cancel the bike run because we feel that the participants are used to biking in  the rain,” said Princess Galura, project director of Sunrise Events Inc. yesterday.

Slippery roads are less of a concern than flooding in case of a downpour.

Road closures for a 90-kilometer bike route that starts in Lapu-Lapu City and crosses cities of Mandaue, Cebu and Talisay will freeze  traffic from 4 a.m. to 2 p.m., a temporary inconvenience that is expected to disturb Sunday morning routines of Cebuanos going to church or the market.

Advisories have been issued since last week reminding  travelers and guests of hotels and resorts who are heading to the Mactan airport to anticipate detours since half of the lanes of the Fernan Bridge will be used for cyclists and several roads will be off-limits.

S. Osmeña Road in Cebu city leading up to the South Road Properties in Talisay City will be closed to traffic with no pedestrians allowed to cross the road, once cyclists show up.

The mood was  upbeat in the Shangrila’s Mactan Resort  ballroom where a final pre-race briefing for triathletes was held yesterday afternoon.
A key presentation was the one made by Kim Atienza, ABS-CBN weather anchor, who is joining the race himself.

He said to expect a cloudy, humid day on the road.

“A light rain is actually good for our bike and run times,” he said, referring to cooler weather if it rains.

Using data from the state-run Pagasa weather bureau, Atienza said there was a slight chance of rain on  Sunday morning.

There’s a 10 percent chance of rain at 6 a.m. , when a gun start signals participants to head for the beach for a 1.9-kilometer swim in the waters off Shangri-la.

Once they emerge from the water, athletes will mount bicycles for the longest stretch  of the race, including the “M” loop similar to the 2013 edition of the Cobra Ironman 70.3 Philiippines. When they cycle back to the resort-hotel in Lapu-Lapu, they will wind up with a 21-kilometer run in barangay Punta Engaño.

There’s a 20 percent chance of rain at 9 a.m. when most participants are cycling on the road with the same odds at 12 noon, said Atienza.

He  said a Low Pressure Area was brewing outside the Philippines and may later develop into a typhoon but “it has absolutely no effect on our race tomorrow (Sunday).”

Temperatures would reach 31 degrees by noon, which makes it important for athletes to drink water and stay hydrated, he said.

Each participant has at most 8 hours and 30 minutes to finish the entire swim-bike-run course.

Safety concerns of Ironman organizers focused as well on a 100-meter section of Plaridel Street in Mandaue, which is under construction.

A crew from the Capitol engineering office  worked overtime  to smooth the surface. The lanes were covered by a thin layer of fresh asphalt when the Cebu Daily News drove by early yesterday morning.

Galura said safety was a top priority and that organizers had the option to cancel a segment if the weather is bad.

“If we think that the bike course is unsafe, we can make the course shorter, depending on a flood and unsafe locations,” she said.

She said eight medical teams are stationed along the route headed by Dr. Peter Mancao, Cebu cardiovascualar surgeon, who’s been the head of the medical  committee of the Ironman 70.5 race in Cebu for the last three years.

Chong Hua Hospital is the official partner hospital of this year’s Ironman 70.3 challenge.

Close coordination over the past months with the four city governments and the Province of Cebu has been key in preparations of Sunrise Events Inc., which chose Cebu as the venue of the half-Ironman for the fourth straight year.

The 2,618 registered participants, including about 700 foreigners,  has quadrupled the initial cast  when the Ironman 70.5 made its Philippine debut in 2009 with 583 entries.

Miguel Navarro, a 23-year-old triathlete and a hotel administration student from Laguna province, said that his team Herbalife, wasn’t bothered by a little rain.

He said they would strive to finish the race regardless of the weather condition after hearing of a sudden downpour last Monday that flooded S. Osmeña Road .

“Sabi nila malakas daw yung flooding sa bike pero lahat naman tayo nag-aim manalo eh,” he said. (They said that there may be heavy flooding during the bike course but we are all aiming to win.)

Joan Plumbley, 39, from England, said participants have to be very careful on their bikes if roads are wet.

She said that she and her team trained every weekend for the event.

“I do what I can every weekend to train for the event and I don’t stop my training because of the weather,” she said./with Mary Claire U. Catado, UP Cebu Intern

Read Next
Bantay Radyo off the air after equipment seized