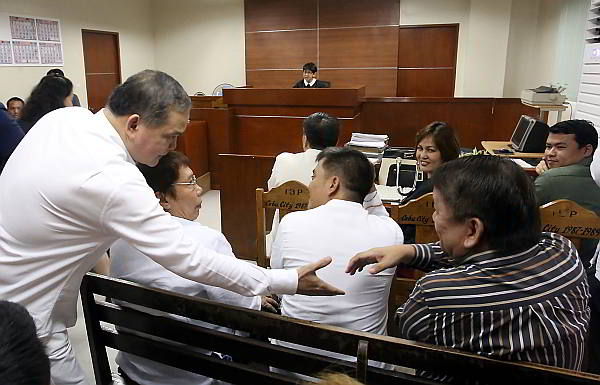 Though not on speaking terms, the on-court meeting between tri-media personality Pablito “Bobby” Nalzaro and former Cebu City Mayor Tomas Osmeña was a touch friendlier than usual.

The two men were inside the courtroom while waiting for the arraignment of the libel suit filed by Osmeña against  the broadcaster.

And upon the arrangement of Prosecutor Mary Ann Castro, who happened to be in the courtroom for another case, Nalzaro sat beside Osmeña for about 10 minutes. The two men didn’t talk to each other.

When Judge Generosa Labra of the Regional Trial Court Branch 23 saw Nalzaro and Osmeña shake hands and sit next to each other, the lawyers of both camps were called in a huddle.

“When the judge saw what happened, she told us that there might be a possibility that this case will be amicably settled among ourselves,” one of the lawyers told reporters after the proceedings.

Nalzaro was open for an amicable settlement. “Why not? But it should be done without any conditions,” he said in an interview.