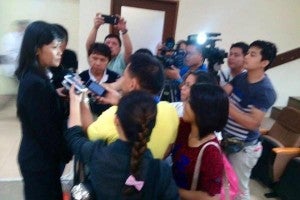 She said she could no longer take the “character assassination and bullying” over decisions she said were made “with my conscience” but which “don’t sit well with the admnistration.”

In a privilege speech during yesterday’s City Council session, Delos Santos said the last straw was her vote on a measure that got the administration’s ire.

She referred indirectly to the 10-3 vote of the council urging Mayor Michael Rama not to proceed with awarding winning bidders in the auction of two lots of the South Road Properties (SRP). She had voted with the majority bloc.

“I feel that I could no longer effectively discharge my present position here in the council. I step down in order to give way to other equally qualified, competent and deserving members of the minority,” Delos Santos said.
With that, her peers expect her to align soon with the Bando Osmeña-Pundok Kauswagan (BO-PK) which controls the council.

Delos Santos, a former barangay captain of Lahug, ran for the City Council north district under Team Rama in 2013 and is serving her third year.

Her drifting away from Team Rama became more noticeable in recent months when she declared herself an “independent”, after she was publicly rebuked by Mayor Rama over her role in disqualifying the lowest bidder of the Cebu City Medical Center project then got shut out of the rebidding committee.

Yesterday she didn’t directly mention the crucial Aug. 5 council vote against the SRP sale, but it was clear what she was referring to.

“Barely two weeks ago, I exercised what I call my better judgement and voted for a measure which certainly did not sit well with the present administration.”

“I personally saw how such action drew the most adverse reactions and opinions, some even below the belt,” she said referring to criticisms over her apparent disloyalty to the Rama administration.

Distressing
“I have for all this time felt bullied. Clearly I’m not the only one reading the newspaper and listening to the radio commentators. I have family and friends reacting very strongly to false allegations and personal attacks on my character,” she said.

Delos Santos said there was “objective evidence of alienation and deceit” which “traumatized me deeply” and that it was “now too late and uncessary to resolve” it.

She said she was bothered most that when the “black propaganda” was in full swing “no one intervened to calm the chaos” or defend her from her camp.

“I am deeply hurt, feel betrayed and alone,” she said.

While she said there was a “tyranny of numbers” in the council, delos Santos said she never thought of threatening a lawsuit against those who disagreed with her because “being able to say NO is the very essence of democracy.”

Those who resort to that ‘become the very tyrants and dictators we have abhorred.”

Delos Santos said she had joined the Council on a “crusade to make a difference between politics and public service” and thanked Mayor Rama for inviting her to his party.

Unfortunately, she said, she’s learned from experience that “there are a lot of friendly politicians, though insincere, fair weather types” who are not true friends.

“I guess through the years I have become a realist, found the courage to confront adversities, learned that politicis is dirty, that men in this business are definitely way too far difficult than women to deal with, and that women can make good politicians.”

She thanked “all those who put me” in the Council and helped her perform her duties, and Vice Mayor Edgardo Labella for his “constant advice and guidance.”

Delos Santos said she was making a choice to “move out of helplessness” and to continue her crusade of public service.

Saying she “has “not lost hope”, delos Santos said she looked forward to the day the City Council can act, regardless of political color, “as an institution which can truly symbolize Cebuano unity” in the name of public service.

Asked by reporters if she is moving to BO-PK, Delos Santos said, “I am not closing my doors to anything. It’s the loudest whisper in town that I am invited. It can be a possibility. In the days to come there will be a categorical declaration. I do not want to preempt that.”

In a separate interview, Mayor Rama said he still included Delos Santos in his council lineup in next year’s elections.

“It is a council matter, not executive matter. I will leave that to Vice Mayor Labella,” Rama said.

When asked about Delos Santo s’s “declaration” in the coming days he said, “I am not interested in any announcement.”