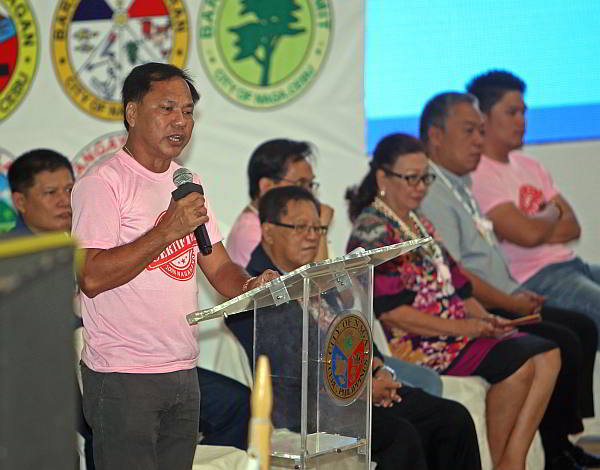 On his third and final term in office, Naga City Mayor Valdemar Chiong said he steered the city to growth amid uncertainties over legal challenges to its cityhood.
His daughter Kristine, a lawyer, was later introduced by  Rep. Gerald Anthony “Samsam” Gullas, as  “the next mayor” of Naga City.

“We have had quite a journey. Together we faced the challenges of cityhood, losing its status twice, regaining it and undertook the birth pains of a very young city,” Chiong said in his State of the City Address (SOCA) at the Enan Chiong Activity Center.

From a budget of P104.6 million in 2006, Chiong said Naga is expected to earn  P650 million this year with assets worth P1 billion, and a Special Education Fund of P120 million.Under his   watch,  the city expanded Naga’s Reclamation Project which now accommodates its City Hall, the Enan Chiong Activity Center, the St. Francis Ocean Park and Baywalk.

Recently, the city completed construction of the City of Naga Hall of Justice, police and fire stations, slaughterhouse and legislative building.

EDUCATION
Mayor Chiong said his biggest investment in the past nine years was access to affordable education for Naga.

Since 2007,  his administration built 57 school buildings, 142 classrooms, and rehabilitated 21 schools and 57 classrooms.

“The greatest and most significant investment we have made is in our people. I believe that the more and better educated our people, the more likely that  they can help their families, and that will mean greater chances of economic development in our city,” he said.

Naga’s  cityhood was  nullified by the Supreme Court, which after at least three rulings, decided to sustain the constitutionality of 16 cityhood laws, including that of Naga.

Naga evolved from  a “first income class municipality in the Province of Cebu into a third income class city.”

But progress in the City of Naga isn’t over yet, said Chiong. He said he was very proud of his daughter, Kristine, a lawyer, for having “a heart for the people.”

Former Rep. Eduardo  Gullas  announced to the  crowd  “If given a mandate by the Nagahanons, Atty. Kristine Chiong will be the next mayor.”

In 2012, the City of Naga College Scholarship Program  gave poor but deserving secondary graduates the opportunity to earn a college degree.

There are 408 city scholars whose tuition is subsidized by the city in the amount of P20,000 each per semester.

About 50  scholars are enrolled at the Cebu Technological University (CTU)-Naga Campus  with a P10,000 tuition subsidy every semester.

“We have assured our people the availability of medicines and guaranteeing that there is sufficient stock when they need it most,” he said.

Rep. Samsam Gullas called Naga a “sleeping giant.” “It just needed to be awakened by the right leader. And here we are today because of Mayor Chiong,” he said.