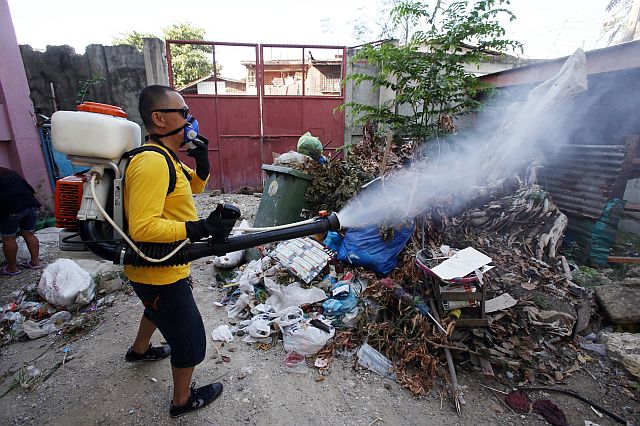 Towns are considering buying their own misting machines to spray insecticide in areas that may have dengue-carrying mosquitoes.

The call was made by Tuburan Mayor Democrito Diamante, president of the League of Municipalities of the Philippines – Cebu chapter after the Provincial Health Office registered at least 862 cases from January to September.

Various methods are being used by  government health authorities to combat dengue while experts caution against the improper use of powerful chemical pesticides that could unduly expose people, especially children, to harm.

Defogging, for example, is only recommended to eliminate  adult mosquitoes in severe cases.

Rotary Club volunteers in the Dengue Task Force of Cebu focus on a larvacide campaign that targets stagnant water where mosquito wrigglers can be killed before they become biting adults with the application of a  chemical compound that is cost-efficient and recommended by the World Health Organization.

Diamante said he hopes the Cebu provincial government will extend assistance  to help towns buy  misting machines since  each town has a limited budget.

The  mayors league in Cebu has yet to meet to discuss this concern.

Each town should have its own misting machine because we don’t know when the outbreak will reach each town,” Diamante told reporters.

As of September this year, the PHO said Argao has the most cases  at 106, followed by Carcar City at 85, Daanbantayan at 68 and Minglanilla at 40, among others.

The data comes from  each municipal health office.