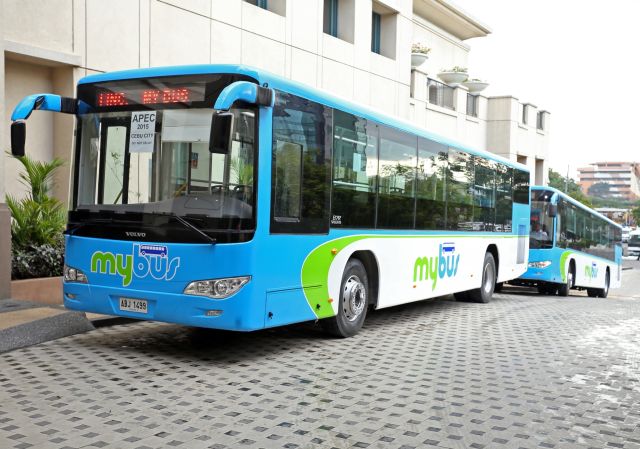 The Euro-5 engine MyBus is 12 meters long and is equipped with two closed-circuit television (CCTV) cameras, global positioning system (GPS) and free wireless fidelity (Wi-Fi) connection. The buses – which are made by Volvo, Mercedes Benz and Daewoo – will use an electronic ticketing system.

SM’s brand new buses will be available to  take interested groups on pre-arranged trips before it starts daily operations.

In a statement, Metro Rapid Transit Services, said they want the public to “experience the bus and its modern and upgraded features.”

As of yesterday, the Land Transportation Franchising and Regulatory Board (LTFRB) 7 has not issued a  franchise for the  Talisay City – Mactan Cebu International Airport  route.

The target was to field 31 buses on November 16, about a week before the SM Seaside City Mall is scheduled to open on November 27 at the South Road Properties. A total of 77 buses will be fielded by next year.

If  My Bus units are fielded without a  franchise, no fares should be collected yet from passengers, said  LTFRB 7 Regional Director Reynaldo Elnar.

“It should be free of charge if they (certain routes) on November 16 without the franchise. If fares are collected,  they would be considered colorum,” Elnar told Cebu Daily News.

He said LTFRB can’t issue a provisional authority because the  application is being opposed. The Cebu Confederation of Transport Operators and Drivers Association Inc. (CCTODAI) held a protest rally during the public hearing last October 16.

A provisional authority allows a transport operator to field vehicles while its franchise application is being processed.  Elnar and other LTFRB personnel inspected the MyBus units the other day.

“They  passed the standards,” Elnar said.

Each bus is about 12 meters long and is equipped with two closed-circuit television (CCTV) cameras, global positioning system (GPS) and free wireless fidelity (Wi-Fi) connection. The buses – which are made by Volvo, Mercedes Benz and Daewoo – will use an electronic ticketing system. To secure a franchise, Metro Rapid Transit is required to provide designated bus stops with a standard unique design, shelters, poles and stands.

The operator must also provide an information system displaying real time bus schedules, next bus stop, estimated time left and estimated time of arrival. Other requirements are monthly reports on bus operations, including the standard daily safety and maintenance checks before first service in the morning, assessment of compliance with agreed schedules and headways, and accident data.

During the event,  Marissa Fernan, SM Prime Holdings, Inc. vice president for Visayas and Mindanao, said they have been “given a franchise for a total of 77 buses.”