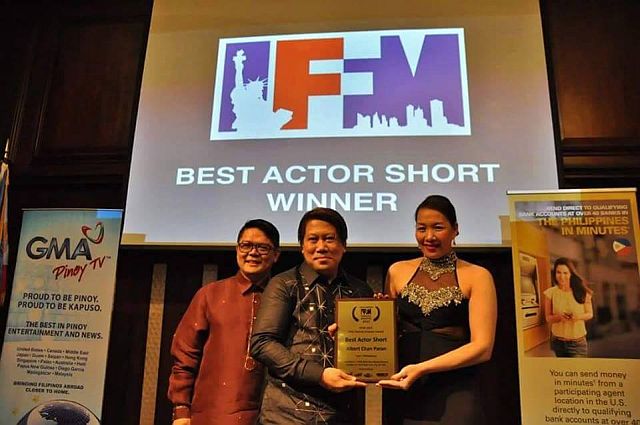 Albert Chan Paran played the role of “Julian Capoy”, a closet gay construction worker who sired a son and tried to raise him as a good man.

“I would like to dedicate this award to my parents. To my mom  ( Nieves Chan Paran ) who passed away last February and to my father (Eriberto Quimada Paran) who passed last 2009 this is for you. To my family. I would like to thank my friends who played and supported me from Cebu, Pagadian, Manila, Luzon, Visayas and Mindanao,” Paran said.

Julie is produced by Liquid Stencil Project and is written and directed by Clanch Dayve Belleza.

“It was very difficult for a real gay person playing the role of a real man than vice versa because I have to be believable.  I have to cut my hair very short as a man,” Paran told Cebu Daily News through Facebook chat.

The film was shown during the Cinema Rehiyon 2015 of National Commission for Culture and Arts (NCCA) when Cebu City hosted the film festival last June.

“It’s the greatest and highest honor  for any film actor to be acknowledged for your craft. I was so nervous, every part of my body was shaking. I was crying when I received the award. It’s a dream cone true after all the struggles and hardship I went through. It’s the best gift I ever received,” Paran said.

A native of Pagadian City, the 41-year old actor said “Julie” is the biggest film for him so far. He was the lead in the Cinemalaya 2014 short film finalist “Ina-Tay.” where he also played the title role as the lead actor.

Paran is also into rentals and real estate which is their family business.  He started his indie film career in 2011, starring in the short film “Bisikleta” produced by UC Theatre Workshop Company and Arcos Lineage Production.

Paran was an extra in the film “Sana Maulit Muli” that starred Aga Muhlach and Lea Salonga in 1995.