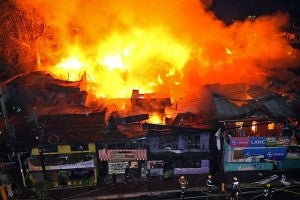 While no one was reported injured during the hour-long fire, acting Cebu provincial fire marshal Ronaldo Orveta said the fire which struck a day after Christmas damaged about 100 structures.

Acting Cebu City mayor Edgar Labella ordered the use of classrooms in the nearby Lahug Elementary School for evacuees.

Ester Concha, head of the Department of Social Welfare and Services (DSWS), said she ordered 300 packed meals for the supper of affected families. The emergency meals will continue for three days. Residents try to save their belongings. (CDN PHOTO/JUNJIE MENDOZA)

DSWS initally listed 35 structures burned by the fire and one partially damaged.

The fire left at least 65 families homeless or 268 individuals.

Some of the fire victims expressed fear that they would no longer be allowed to return and rebuild their homes which stand on property owned by the University of the Philippines (UP) Cebu campus.

Labella said he will meet with the city disaster council today to assess their next steps.

The fire, whose alarm was raised at 6:22 p.m., started in an upper floor room in the house of Rosemarie Villarin.

Villarin, 46, admitted leaving a lighted candle on top of a plastic cabinet. They’ve been using candles at ngiht for a year after their electricity was disconnected.

She said only her 4-year-old grandson was inside the room when the fire started.

“Everything happened so fast. We were unable to save anything,” she said in Cebuano.

The fire started in the interior of sitio Avocado across the street from th Lahug barangay hall.

Narrow roads lead to the area which is slightly downhill and leads to the Lahug River.

Fire fighters had to connect their hoses to reach the site. Some climbed roofs of roadside structures to get a clearer view of the fire site.

Others stayed near the UP Cebu campus and sprayed water from their vantage point.

Read Next
1 KILLED IN CALAMBA TROUBLE