The  motorcade that will bring the images of the Sto. Niño and Our Lady of Guadalupe to Mandaue City for the  ‘traslacion’ or ritual transfer on January 15 will take a longer route this year.

It will pass  barangays Banilad and Bakilid in Mandaue City.

The motorcade from the  Basilica del Sto. Niño to the National Shrine of St. Joseph in Mandaue City, is  one of the highlights of the Fiesta Señor whose novenas masses start tomorrow. 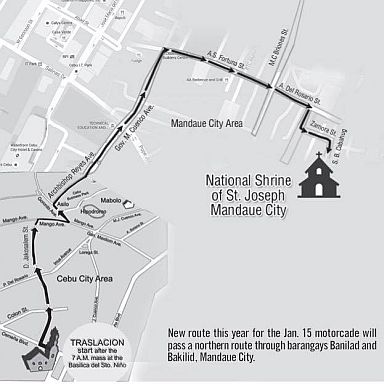 New route this year for the Jan. 15 motorcade will pass a northern route through barangays Banilad and Bakilid, Mandaue City.

The traslacion, the Spanish word for “transfer,”  will follow a 5:30 a.m.  Mass at the basilica’s Pilgrim Center.

Mandauehanons will welcome the images at the boundary of the cities of Cebu and Mandaue, said  Paul Yabao, overall Fiesta Señor consultant.

The motorcade will pass  A. del Rosario St,  and S.B. Cabahug Street before reaching the church at 9 am. in Mandaue city,  where the two images will stay for an overnight vigil.

The next day, a  6 a.m.  fluvial procession will take place down the Mactan Channel  and then the annual solemn foot procession of the Sto. Niño down major streets of Cebu City.

“We want other people to also experience the joy of seeing the Sto. Niño pass by their homes,” said Fr. Jonas Mejares, rector of the basilica, about the new motorcade route,  in a press conference.

Residents of barangay Mabolo in Cebu City, and Subangdaku in Mandaue City will have to wait for next year before the traditional route will again be implemented.

Heavy traffic in Subangdaku was a factor considered.

The Augustinian fathers, to whom the original image of the child Jesus that was given as baptismal gift by Portuguese explorer Ferdinand Magellan to Cebu’s Queen Juana in 1521.

For an orderly motorcade, he discouraged devotees from letting escorts of the Sto. Niño wipe their handkerchiefs and towels on the glass case that contains the image.

“Remember, this is a motorcade. If you want to venerate or kiss the image, you can go either to St. Joseph’s National Shrine or at the basilica,” the rector said.

The 451st Fiesta Señor celebration is ushered in by the 4:30 a.m. Penitential “Walk with Jesus” from Fuente Osmeña to the basilica tomorrow.

The two-kilometer walk is expected to draw thousands of devotees.

Fr. Mejares will preside over the first novena Mass at 5:30 a.m. at the Pilgrim Center where this year’s fiesta Hermano and Hermana Mayores, businessman Mario King and wife Haydee, will be installed.

Except on January 7 and 15 where there are dawn processions,  11 Masses will be held at the outdoor Pilgrim Center everyday leading to the Feast Day of the Sto. Nino.

To accommodate devotees, the basilica will be open 24 hours a day starting tomorrow until January 17.

Read Next
Truck ban for roads near IEC