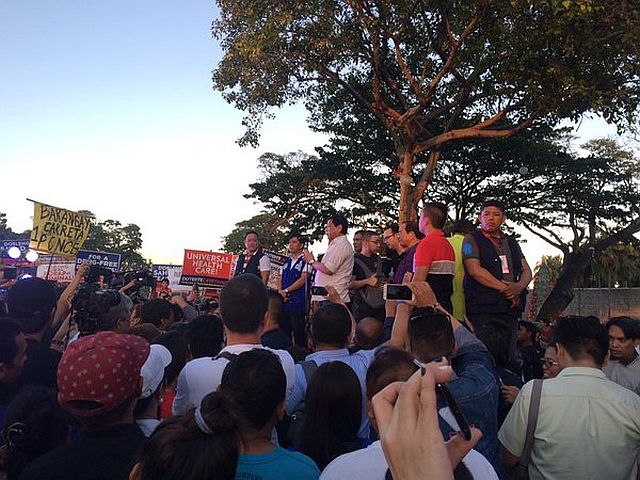 Davao City Mayor Rodrigo Duterte promised Cebuano supporters that he will eliminate the drug menace and criminality within three to six months if elected President.

In a “town hall discussion” at the Plaza Independencia late afternoon today, Duterte said under his administration, people can freely roam the streets again without worrying about lawless elements.

“I-uli nako ang paggamit sa dalan. Karon, ang mga dorogista ug criminal (I will give back the use of our roads. Now, drug lords and criminals) they have robbed us of our use of public places and streets,” he told hundreds of supporters who gathered to hear him speak.

He said his first three to six months will be “bloody” as he would go after drug lords and criminals.

Duterte said he will make sure there will be no extra judicial killings and added in jest that he will let criminals fight back.

Duterte also bared his other plans like pushing for federalism, doubling the salaries of police and army personnel and giving their children free education from kindergarten to high school.

He also promised income tax exemption for those earning P20,000 and below and to stop contractualization of employees and said he won’t hold government funds for himself aside from his salary.

Duterte said contingency or intelligence funds will be given to the proper agencies.

Duterte also said he considers Cebu as his land of birth since his family comes from Danao.

If he becomes president, Duterte also promised to issue a proclamation declaring a Lapu-Lapu Day in the country to honor the warrior who fended off Spanish colonizers.

He also said he will ask the Bureau of Fisheries and Aquatic Resources (BFAR) to rename the Lapu-Lapu fish to Magellan.

As he ended his speech, Duterte asked for the people’s understanding to look beyond his cussing and swearing and consider his principles.

“Sa likod sa akong pamalikas, naay storya bahin sa kalisod sa mga Pilipino (Behind my cussing, there’s a story about the hardships of Filipinos). If you want to evaluate me, don’t evaluate my mouth. But rather, look at the issues and the values I stand for and my principles,” he said.

He said despite his swearing, he has done a lot of things in government and the best example of which is Davao City where he’s been mayor for 22 years.

Duterte also praised Cayetano saying he’s a very decent person and that they’ve known each other for a long time.

Duterte told the people that if they don’t vote for Cayetano, then they should not think of voting him.

“If you give me a different vice president, they will definitely go after me,” he said in Cebuano.

He also openly admitted to the crowd that he’s a leftist and socialist since he came from a poor family but also assured that his administration will be for the people.

Duterte’s talk lasted for over an hour. After which, he gave Liban and Cam a few minutes to speak.

Liban said he will advocate for programs for families and senior citizens while Cam said she’ll push for a Whistleblowers Act to help ensure there will be no more corruption of the national government’s funds.

Hundreds of supporters attended the intimate activity wherein they gathered around Duterte and Cayetano.