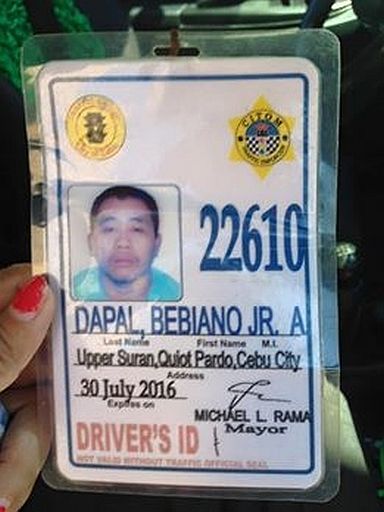 A taxi driver is in hot water when a Facebook post became viral after cursing and demanding P2,000 from his passenger whose one-year-old nephew threw up on the cab’s floor spread on the Internet.

The woman, who requested for anonymity identified the taxi driver as Bebiano Dapal Jr., who drove Catz Taxi bearing plate number 7AT-125519.

Regional Director Reynaldo Elnar of the Land Transportation and Franchising Regulatory Board (LTFRB-7) said his office would  summon Dapal and his operator tomorrow for an investigation into the incident.

The woman rode on board Dapal’s taxi with her mother, one-year-old nephew and 13-year old cousin to attend a Mass at the Birhen sa Regla Church in Lapu-Lapu City when the incident occurred last Jan. 7.

She said the heat and traffic congestion caused her one-year-old nephew, who sat in the backseat, to throw up on the floor.

“I wiped off his vomit because we had three extra towels. I heard the driver  say tsk, tsk but I continued to wipe even with the traffic,” she told Cebu Daily News.

They stopped across the University of Cebu-Lapu Lapu and Mandaue Campus (UCLM) to buy ethyl alcohol and towels.

The woman said she was worried about her mother who got off the taxi because the warm weather may have raised her blood pressure. She said this irked Dapalwho allegedly cursed her mother.

“He was inconsiderate.  It was just an accident that my nephew vomited. It was unexpected but he was rude and arrogant to us,” she said.

The 26-year old woman said she was willing to pay for the car wash of the taxi but Dapal allegedly asked P2,000 as payment, saying that any taxi driver would  charge for any damage in his unit. 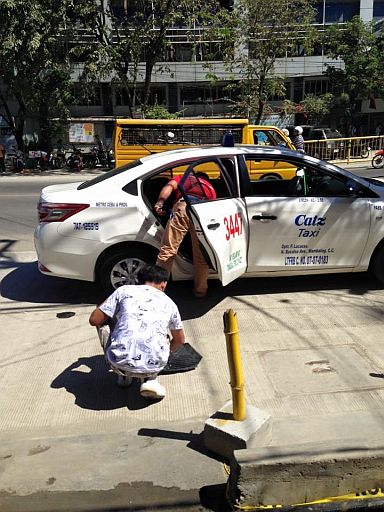 The female passenger refused, saying P2,000 fee was even more than the cost of car wash service.

They heard the driver tell them  ‘mura kag nakapalit ug awto da (you look like you could afford to buy a  car),’.

The driver challenged her to  face him at the office of his taxi operator or  report the incident to the Land Transportation Office (LTO).

The driver showed his ID card and fare receipt for P153. She took a photo of both.

The woman gave the driver P170 and was handed back  P20 in change. “I could even remember him laughing while he handed the change,” she said.

The one-year-old baby is now with his father in Pangasinan.

Lawyer Antonio Enrile Inton Jr., LTFRB board member, said drivers are not allowed to demand fees or penalties from passengers.

“He (driver) has no bases to collect the amount from the passenger, because he is driving a public utility vehicle (PUV)” Inton told Cebu Daily News.

If Dapal is proven to have cursed and acted arrogantly toward the passengers, Inton said the operator will also pay another P5,000.

“I am calling the attention of the operator of the taxi to accompany Dapal on the regional office on Monday,” Inton said.

Elnar said drivers should prepare plastic bags for use of passengers who vomit.

“We told them to be ready including the taxi drivers. Just like what happened in bus. There are even passengers who vomit inside the bus,” he said.