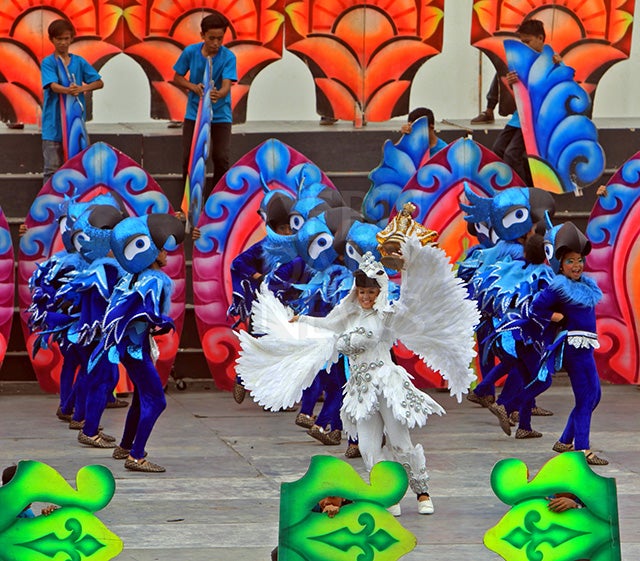 Their dance presentation was inspired by the 2011 animated movie “Rio” with dancers dressed as blue Spix’s Macaw birds who thanked the Sto. Niño for his intercession in saving a hatchling from a black bird.

Both winners had the same choreographer, Rolly Layola.

“We just hosted the Asia-Pacific Economic Cooperation (APEC) meetings, and now the International Eucharistic Congress (IEC). We are slowly growing, changing and flying high, which is what both dances that I choreographed really portrayed,” Layola said.

Children dressed as blue Spix Macaw birds slowly gathered around the queen bird who carried the Sr. Sto. Niño, and protected an egg from the evil black bird that tried to destroy it.

In the end, the egg hatched. A tiny blue bird emerged, learning how to fly.

Don Vicente Rama Memorial National High School (MNHS)’s performance, which was also choreographed by Layola, showed how a caterpillar transformed into a butterfly with the help of a queen butterfly that was guided by the Sr. Sto. Niño.

“I really wanted to show the audience how the Sr. Sto. Niño guides us in the changes in our life, and how Cebu with everything that’s happening, was ultimately helped by Sto. Niño,” Layola said.

“I am overwhelmed, but I am happy because we were able to offer our dance to Sto. Niño until the moment we won,” said 14-year-old Angelina Amangpang, festival queen for Don Vicente Rama MNHS.

Josefina Guillen, chairman of the board of judges, said they had difficulty in choosing this year’s winners.

“It was very close especially in the secondary division. In the elementary, I think all the aspects of being a winner, like performance and production design was in group 4 (City Central),” she said.

“Considering everything else equal, what made the group win was that they showed something new, different, something not seen before. Or if seen before, they put a new twist to it,” she added.

Aside from topping the Best in Ritual Showdown to win the P350,000 cash prize, Cebu City Central School also bagged the first prize for the Musicality (P50,000) and Street Dancing (P50,000) categories as well as the Best in Costume award (P50,000) in the elementary division.

Guillen also commended the Sinulog Foundation, Inc. (SFI) for helping the choreographers of the contingents in improving their presentations this year.

Unlike past competitions, there was no rain during yesterday’s presentations by the contingents though there was a slight drizzle afterwards.

In the secondary division, Don Vicente Rama MNHS played up environmental preservation in their presentation.

Their dancers were dressed as violet butterflies with sturdy wings and supported by colorful neon props and backdrops of green and orange.

Their presentation showed how the Sto. Niño helped them when one of them lost her wings in an accident.

“Using a theme that’s environment is very now. In the city you don’t see butterflies anymore. Here, you can help people realize to give importance to things,” Guillen said.

She said the colors helped the audience focus on the dancers or on the props, whichever is the highlight in certain portions of the dance.

Apas’s presentation was rooted on religiosity as they featured Christian doctrines and values like faith, hope, love and devotion which they showed in letters placed in their backdrop.

Guillen said choreographers should focus on the development of a good theme and a clear message for the audience.