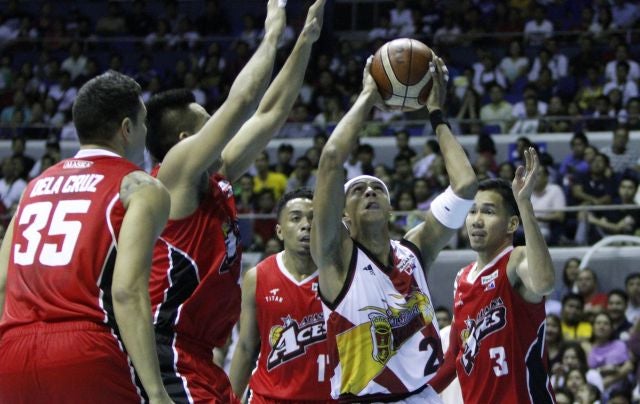 The Alaska Aces chalked up another victory and Vic Manuel had his fingerprints all over it.

Manuel was involved in three critical plays in the dying seconds, putting up another heroic performance to lead Alaska to a pulsating 83-80 win over the undermanned but game San Miguel Beermen last night in Game 2 of the 41st PBA Philippine Cup Best-of-Seven Finals at the Araneta Coliseum.

Following up his Game 1 brilliance that saw him scoring 14 of his playoff-high 24 points to lead Alaska to a 100-91 win, Manuel had two crucial defensive stops and a pair of free throws that helped the Aces survive the Beermen and take a crucial 2-0 series lead.

Alaska was in control for a large part of the game but San Miguel came alive in the fourth to seize a 73-71 lead in the final 6:21.

San Miguel tied the contest at 80-all but couldn’t score from that point and Alaska had Manuel to thank for.

After a split free throw by Dondon Hontiveros that put Alaska on top, 81-80, San Miguel had the chance to grab the lead but Yancy de Ocampo bungled two free throws with 19.1 seconds left.

A huge defensive stop in the next play where Marcio Lassiter stole the ball from Manuel gave the Beermen another opportunity to surge ahead.

San Miguel, however, failed to capitalize.

Ronald Tubid missed a wide-open three-pointer from the right wing. De Ocampo gobbled up the offensive rebound but his follow-up shot was blocked by Manuel.

Manuel, who finished with 18 points, then sank two free throws to hand a Alaska an 83-80 lead with 1.7 seconds left.

Then in a crucial play, San Miguel lost precious seconds when Lassiter’s inbound pass to Cabagnot was tapped away by Manuel, leaving the Beermen with only eight-tenths of a second left to come up with a crucial basket.

Read Next
Cebuanos compete in D-League