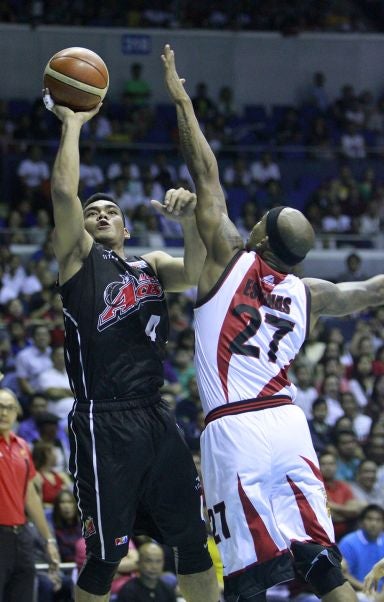 Game Seven. Two words that nobody thought would be mentioned in this championship series.

The San Miguel Beermen continued their amazing surge, surviving a third do-or-die game with a decisive 100-89 win over the Alaska Aces last night in Game 6 of the 41st PBA Philillpine Cup Best-of-Seven Finals at the Araneta Coliseum.

The Beermen became the first team in league history to forge a 3-3 tie after going down 0-3. They can complete an even impressive feat.

San Miguel will try to become the first team to win a best-of-seven series after falling to a 0-3 hole when the two squads meet for the last time for Game 7 slated on Wednesday at the Mall of Asia Arena.

The two teams have been in several Game 7 battles.

The Beermen outplayed the Aces in the fourth quarter, breaking the game wide open behind Marcio Lassiter and Cebuano big man June Mar Fajardo, who had a solid outing in his second straight game in the Finals after missing the first three matches due to a knee injury.

Fajardo and Lassiter each scored eight points in a telling 16-2 run to start the fourth period that saw the Beermen turning a slim 67-66 lead to a fat 83-68 advantage.

Yancy de Ocampo continued his stellar showing in the series, scoring 14 points as two other Beermen also wound up in double figures in Arwind Santos and Alex Cabagnot, who each had 10.

Vic Manuel paced the Aces with 21 points, while Calvin Abueva scored 17 points before he was tossed out in the final 36.1 seconds of the game after committing his second technical foul.

Alaska had bright moments in the first half when it posted a 35-22 lead early in the second period.