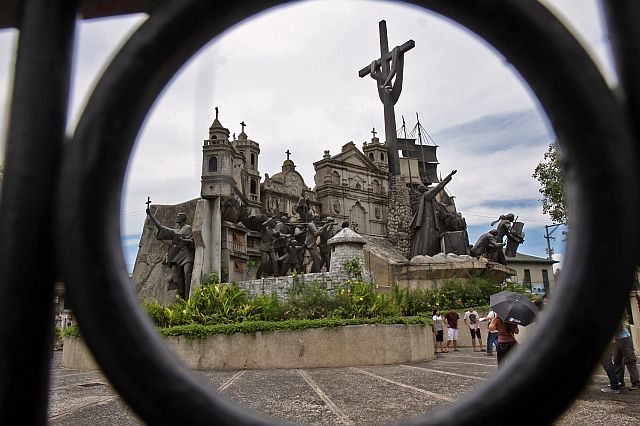 The Twin City Heritage Tour which includes the Parian Heritage Monument, is one of the best-selling tour packages among IEC delegates. (CDN PHOTO/JUNJIE MENDOZA)

“IT is a very good time to showcase the city and (let the guests) feel the hospitality of the Cebuanos.”

Manguilimotan, a past president of the Hotel, Resort and Restaurant Association of Cebu (HRRAC), said that the IEC benefits not only accommodations (sector) but tourism (industry) as a whole, because for many of the delegates, it is their first time in Cebu.

“I was able to talk to some of the delegates in the lobby as they were checking in,” she said. “I can say that majority or around 80 to 90 percent are here in Cebu for the first time.”

She said that hotels are now encouraging their guests to stay even after the end of the IEC, and to take part in some post-congress tours.

Manguilimotan helped organize hotels and other accommodations in preparation for the IEC.

“The accommodations are very supportive because it’s not only that the IEC is bringing higher number of accommodations to hotels, it is increasing tourism. It is a very good time to showcase the city and (let the guests) feel the hospitality of Cebuanos,” she said.

Manguilimotan said that over 60 percent of the bookings made in the (Parklane) hotel are participants of the Eucharistic congress.

She said of the 241 rooms in Parklane, around 140 rooms are occupied by delegates and speakers in the IEC.

At present, Parklane is fully booked.

Manguilimotan said in an interview last Saturday that she expected many other hotels in the city to be experiencing the same influx of occupants — all due to the congress.
There are over 13,000 registered participants and unregistered pilgrims in the week-long IEC, taken in not only by hotels but also by several private homes.

“I believe that many others (hotels) are fully booked … maybe 80 to 100 percent booked,” she told Cebu Daily News.
Tours

According to Alice Queblatin, managing director of SouthWind Travel and Tours and vice president of the Tourism Congress travel and tours group for the Visayas, at least 1,000 delegates have booked tours over the 10 days.

“Those who went on tours actually pre-booked them,” she said.

Bestsellers for the tours were the Twin City Heritage tour; tour of churches and shrines in south Cebu; Arts, Crafts and Industry tour; and the Panoramic tour.

Queblatin added that many of the delegates also requested the Bohol Day Tour, but that this had to be cancelled due to unfavorable weather conditions.

But last Wednesday, 16 delegates left Cebu to explore the island of Bohol.

Agapito Bibat, Commander of the Philippine Coast Guard 7, said that he was informed of the departure of the delegates for Bohol by his sub-station commander.

The Lite Shipping vessel, however, was allowed to sail because it is more than the 250 gross tonnage limit covered by the gale warning.

Meanwhile, Queblatin said that the schedule of activities for the pilgrims were so tight that it did not leave much time for on-site tour bookings.

However, she said there have been several delegates who booked for post-congress pilgrimage tours to Bohol, Leyte, Cagayan de Oro and Manila.

Read Next
‘Continue to pray for the world’