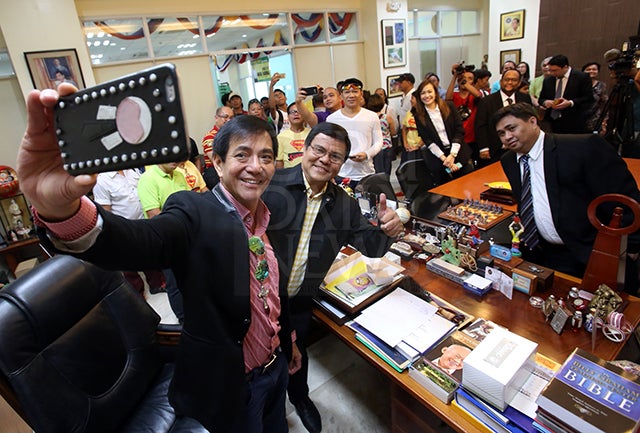 Mayor Michael Rama takes a selfie with Vice Mayor Edgardo Labella (2nd from left) and other city officials as he goes back to work after serving a two-month preventive suspension. (CDN PHOTO/JUNJIE MENDOZA)

Cebu City Hall was in a festive mood yesterday morning as employees welcomed back Mayor Michael Rama after his 60-day preventive suspension.

Tarpaulin banners and posters with the words “Welcome Back” were hung inside and outside City Hall.

Employees of the Mayor’s Office were all dressed in yellow T-shirts with the print “SuperMike Returns to Serve” as they welcomed their boss.

But the mayor’s number one critic, former mayor Tomas Osmeña, says Rama might not be in office for long.

He was referring to the rumored upcoming suspension of Rama over the calamity aid case.

The Department of Interior and Local Government (DILG) recently wrapped up its investigation on the administrative case filed by lawyer Reymelio Delute against Rama, Vice Mayor Edgardo Labella and 12 city councilors for distributing P20,000 calamity aid in 2013 to all City Hall employees.

City Hall lawyers, on the other hand, see a legal battle in their favor.

The Court of Appeals (CA) in Manila recently issued a resolution inviting city lawyers and officials as well as representatives from the Office of the President and the DILG to a hearing by oral arguments on February 16 in Manila.

City lawyers earlier filed before the CA a petition for review questioning the jurisdiction of the DILG and the Office of the President over the case.

Osmeña said if the president is “consistent with his Daang Matuwid program,” another suspension order should be coming out for Rama based on the case.

Considering that the Commission on Elections (Comelec) has already declared a ban on suspension orders from January 10 to June 8, Castillo said they were confident that there would be no more suspension orders against Rama.

An exception to the ban can only be granted if there is prior Comelec approval for it based on the Comelec resolution.
Castillo said this involves a process which includes notifying the concerned parties of the result of the investigation first.

In an interview inside his office at around noon, Rama said he will be “going back to basics” in his first few days as mayor again.

He described his two months out of City Hall as “humbling, fascinating and exciting.”

At 7 a.m., a thanksgiving Mass was celebrated by Cebu Archbishop Jose Palma at the Plaza Sugbo grounds fronting the City Hall with the city government employees who also celebrated their Family Day yesterday, one of the city’s events leading to the Charter Day Celebration on the 24th.

In a speech at around 11 a.m., Rama thanked Labella, City Hall lawyers, department heads and employees for taking care of City Hall while he was away.

He also acknowledged rumors about his second suspension and asked employees and city officials to “be prepared” during his speech yesterday.

“Notwithstanding, I have been telling all of you to prepare. I will repeat, to prepare because no matter what, they will never stop to cut my neck,” he said in his speech.

For the past two months, Rama has been serving a preventive suspension ordered by the Office of the President for an administrative case filed by Labangon Barangay Captain Victor Buendia who alleged that Rama unlawfully demolished a barangay-funded center island project in Labangon.

It’s been a challenging two months for Labella as acting mayor, he said, especially since he had to handle several activities like the Sinulog and the 51st International Eucharistic Congress (IEC) on top of other city concerns like responding to several fire incidents, signing laws and resolutions, among others.