Sans their highly-touted import, the Talk ‘N Text Tropang Texters started their title-retention bid on a high note after they escaped the Blackwater Elite, 108-102, Wednesday night at the start of the 41st PBA Commissioner’s Cup at the Araneta Coliseum. 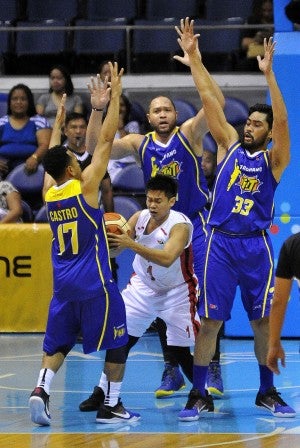 Jerick Canada of Blackwater finds himself in the middle of a Talk ‘N Text triple team of Jayson Castro, Kelly Williams and Ranidel de Ocampo.
inquirer

The come-backing Johnson served a one-game suspension that the league meted out after he figured in a fight in the team’s tune-up game with the same Blackwater squad last Jan. 30.

Castro scattered 22 points and hit a critical triple that gave the Tropang Texters a 106-102 lead after the Elite moved with a point with 1:11 left.

Returning from a back injury, De Ocampo chipped in 20 points.

The Elite, however, failed to get significant contributions from import MJ Rhett, who finished with just 16 points and seven rebounds.

“I just have to adjust with the rules here, because you can’t use an arm-bar or play more physical, which is what I’m used to in the States,” said Rhett in a pba.inquirer.net report.

Rhett scored 12 of his total output in the second half where the Elite tried to come back from a 76-90 deficit.

The rookie Tautuaa had 10 points in a torrid third quarter run that saw Talk ‘N Text taking a 73-82 lead, going into the final period.