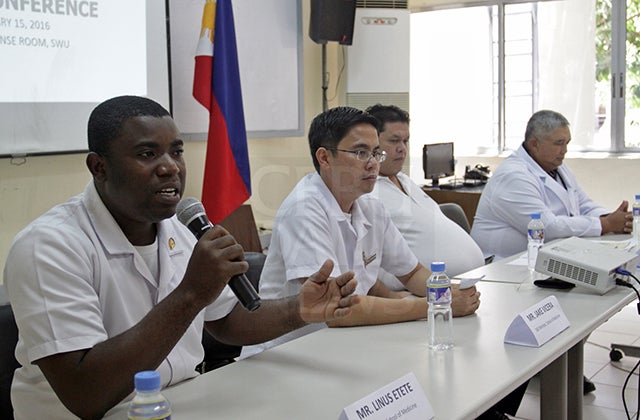 Linus Etete, a foreign student Southwestern University’s (SWU) School of Medicine updates the media on their status in relation to the ongoing feud between the school and Matias H. Aznar Memorial (MHAM) Colleges of Medicine. With him is Jake Vicera (second from left); laywer Godwin Denzil Manginsay (third from left), VP for Legal and External Affairs; and Dr. Peter Aznar, dean of the School of Medicine. (CDN PHOTO/LITO TECSON)

A DIALOGUE between representatives of Southwestern University (SWU) and Matias H. Aznar Memorial (MHAM) Colleges of Medicine will be mediated by the Commission on Higher Education (CHED) in Manila on March 4.

“We are very much happy with this development that we will be having this dialogue because now we can hear both sides. We have been initiating any form of communication to CHED so that we can talk the problem over,” SWU chief legal officer Godwin Denzil Manginsay said.

Manginsay said they hope a decision will be reached addressing the prejudice felt by medical students of SWU due to the ongoing feud between the two schools.

Until now, the medical school’s 23 graduates last year have not received their special orders which would allow them to take the medical board exams.

The school’s 65 foreign students have also not been issued endorsements from CHED to the Bureau of Immigration for visa renewal.

In a statement dated February 9, CHED chairman Patricia Licuanan also addressed the pending dialogue, saying that the agency’s main concern is the medical students affected by the controversy.

“The two institutions (should) exert all efforts at forging a viable and acceptable solution for their mutual benefit, and possible co-existence, but this should be in accordance with CHED policies, standards and guidelines,” the statement said.

While SWU officials applauded CHED’s move to look for a “win-win” solution to the problem, Manginsay said the school may be unwilling to apply for a permit to operate.

He also suggested that MHAM would be in a better position to apply for their own permit.

“Until today we have not received an order from CHED revoking our recognition. If they want the co-existence of the two schools, it’s fine with us. But what we are concerned of is that give them (MHAM) a recognition in their name. Do not give a recognition issued to SWU to another entity,” Manginsay said.

Read Next
One dead in 2 fires