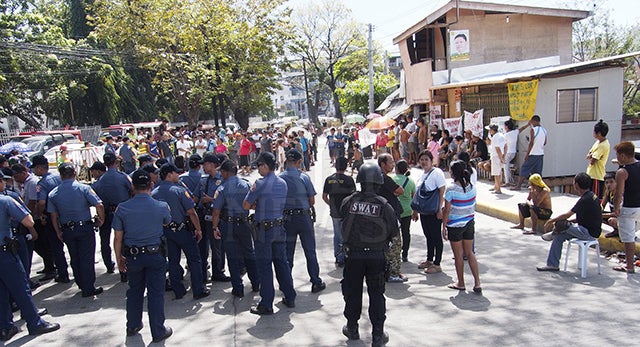 A portion of M. Velez Street in Barangay Capitol Site, Cebu City was closed to traffic due to a standoff between residents and demolition team. (CDN PHOTO/ CHRISTIAN MANINGO)

Caballes and lawyer Collin Rosell of the Division for the Welfare of the Urban Poor (DWUP) met with the judge to lend their voices to the affected families who want to clarify certain matters regarding the extent of the demolition.

“But the judge no longer wants to entertain any discussion (since his order was final). He also wants to avoid perceptions of favoring parties,” Rosell told reporters.

“In short, there’s nothing to wait (for). He wants his order to be implemented,” he added.

For settlers who want to stay in the area, Rosell said the judge wants them to coordinate with the owner.

A demolition team and a sheriff from RTC Branch 19 served a final notice to demolish the houses yesterday.

Tension rose when the residents resisted. They formed a human barricade and blocked the way of Sheriff Caballes and the demolition team, which was carrying hammers, mattocks and other demolition equipment.

“I am just administering this order,” Caballes told the residents.

M. Velez Street was closed to traffic because of the standoff.

Vehicles were not able to pass from 9:30 a.m. to 3 p.m. since the area was blocked by affected residents, demolition team, police personnel and members of Special Weapons and Tactics (SWAT).

A public address system was  set up along the sidewalk of M. Velez Street.

Barangay Captain Manuel Guanzon said it is his duty to protect his constituents.

Based on the documents showed by Caballes, the first house that was to be demolished is owned by Petra Abaquita.

The affected residents claimed the demolition order covered only  Lot 6085-A-1 on M. Velez St., which is owned by the heirs of the Mauricio Quijada Association Inc.

They insisted that the order didn’t cover Don Gil Garcia St. and the area was considered a public domain.

“There was no case filed against the residents and there was no pre-demolition conference that happened,” he said.

The demolition did not push through after the Cebu City government, represented by lawyer Jade Ponce, head of the city’s land management council and DWUP chief Rosell intervened.

“This is a question of fact right now. Ang ato interest is to make sure the laws and procedures are followed,” Ponce said after checking the public domain and the vacant lot 6085-A-1.

“What the sheriff must do is to make sure to identify the specific areas for demolition. He must have precise survey of the area. It is unfair for the people who are not part of the case,” he said.