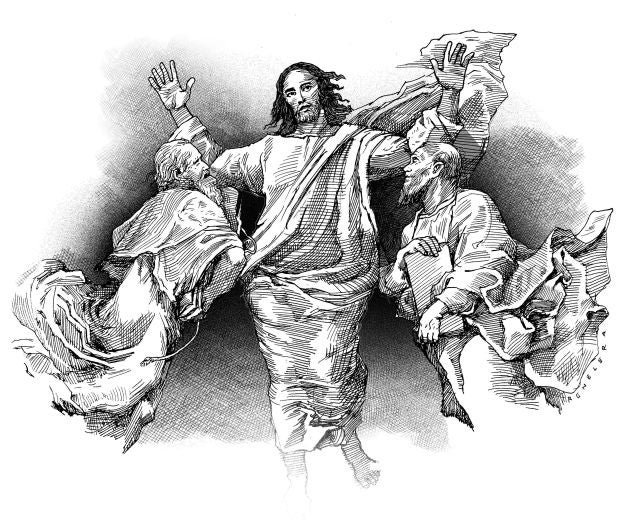 The 16th-century art historian Giorgio Vasari hailed “The Transfiguration” as Raphael’s “most beautiful and most divine” work. At the Louvre, where it stayed for a time, it competed with Titian’s “The Death of St. Peter Martyr” for first honors.

It has a fascinating past. Cardinal Giulio de Medici, a cousin and chief advisor of Pope Leo X, ordered two paintings for his archbishopric in Narbonne, southern France – one, “The Transfiguration of Christ” by Raphael, and the other, “The Raising of Lazarus” by Sebastiano del Piombo. But this only rekindled the rivalry between Raphael and Michelangelo from their Sistine Chapel days, because Michelangelo did the drawings for Sebastiano del Piombo’s work.

Sebastiano del Piombo finished his painting first, which gave Raphael time to review his work and make changes. Raphael died before he could finish his painting, which thankfully needed a mere cleaning up. His body lay in state for two days at his house with “The Transfiguration of Christ” at his head.

Instead of carrying it to France, Cardinal Giulio de Medici installed the painting on the high altar of a church in Rome. But in 1797, Napoleon’s troops took it to Paris and put it in the Louvre, where it stayed until after the fall of Bonaparte, when, together with other paintings, as a consequence of the Treaty of Paris, “The Transfiguration” returned to the art gallery of the Vatican Museums.

Three of the Gospels carry similar accounts of the Transfiguration, when Peter, James and John, who had gone with Jesus to a mountain to pray and had fallen asleep, woke up to see Jesus’ face “changed in appearance and his clothing became dazzling white.” All the while, Luke writes, Moses and Elijah, who likewise appeared in glory, conversed with Jesus about “his exodus that he was going to accomplish in Jerusalem.”  When Moses and Elijah were set to leave, Peter quite innocently suggested to Jesus that they build three tents there, one for him, one for Moses and one for Elijah. But then “a cloud came and cast a shadow over them,” and they became frightened and from the cloud heard a voice saying, “This is my chosen Son, listen to him.”

Raphael presents Jesus, Moses and Elijah floating in a lambent cloud, and the three apostles on the ground, two shielding their eyes from the glare of the sight, and one bending in fear, face down. Two other men kneel on the left – benefactors of the Medici’s archbishopric or else martyrs whose commemoration fell on the feast of the Transfiguration.

Below this portrayal we see another one – the apostles trying to heal an epileptic young man, and failing in the effort. The inspiration for this reportedly came from a book by a saintly Portuguese Franciscan, Blessed Amadeo Menes da Silva, who wrote about the Transfiguration and the possessed boy, one after the other, proposing that the Transfiguration foreshadows the Last Judgment and the final defeat of the Devil – the reason that the apostles could not cure the possessed youth, which only Christ could do, and which one of the apostles around the epileptic makes clear by pointing to the Transfigured Christ buoyed up in the cloud. Goethe summarized the painting in this manner: “The two are one: below, suffering, need; above, effective power, succor. Each bearing on the other, both interacting with one another.”

According to Dorothy A. Lee, at the Transfiguration, the mountain became the point where human nature meets God, the meeting place for the temporal and the eternal, with Jesus acting as bridge between heaven and earth.