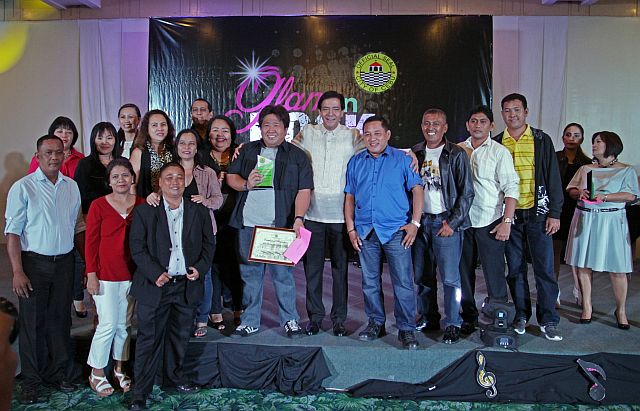 The awardees with Cebu City Mayor Michael Rama at center pose for a group shot at the Parklane Hotel. (CDN Photo/Lito Tecson)

WITH no days off and no leaves due to major events like the Asia-Pacific Economic Cooperation (APEC) meetings, the Cebu City Transportation Office  (CCTO) was recognized as the Most Outstanding City Hall department in last Saturday evening’s awarding rites.

The awarding rites held at the Parklane Hotel was one of several lined up for the forthcoming 79th City Charter Day celebration on Feb. 24. Two traffic enforcers from CCTO were among the special awardees.

During these events along with Christmas and New Year and this year’s Sinulog, traffic enforcers were not allowed to take days off, leaves and were also asked to work overtime.

This is on top of their day-to-day operations to ensure smooth traffic flow in traffic hotspots in the city like the Banilad-Talamban corridor and during the opening of two big malls in the city — Robinsons Galleria Cebu and the SM Seaside City Cebu together with its MyBus System.

“It’s a challenge for us both personally and professionally. But we’re happy to say that we were able to meet the challenges. It was hard getting there but this award made it all worthwhile,” Yap told reporters in an interview after the event.

Yap was also named one of the mayor’s special awardees together with traffic enforcer Marilou Alferez. They each received a plaque and P20,000.

Another traffic enforcer Jounald Bautista was recognized as one of the five most outstanding rank-and-file employees. He also received a plaque and P20,000.

“We really need to work. We don’t count the hours, we don’t say no. Our heart and dedication should be in our work. I’m very happy. Whatever I’ve achieved now, I will try my best to even surpass it,” he said in Cebuano.

Bautista has been a traffic enforcer for almost 20 years already.

He is now a team leader for CCTO’s mobile group which responds to traffic-related incidents.

Cebu City Medical Center (CCMC) Hospital Director Rey Cris Panugaling was also awarded as the most outstanding department head for the frontline cluster and received a plaque and P50,000.

Boyjumel Ejercito of CCMC was also awarded as one of the most outstanding rank-and-file employees together with Nestor Bordalba of the Department of Public Services (DPS), Gloria Labiste of the City Health Department (CHD) and Domingo Biongco of the Office of the City Markets.

In his speech, Mayor Michael Rama reminded the awardees to continue working hard and to let their actions speak for them.

DPS Chief Dionisio Gualize was also awarded as the most outstanding department head for the support cluster.