Fish market in Pasil is now a playground 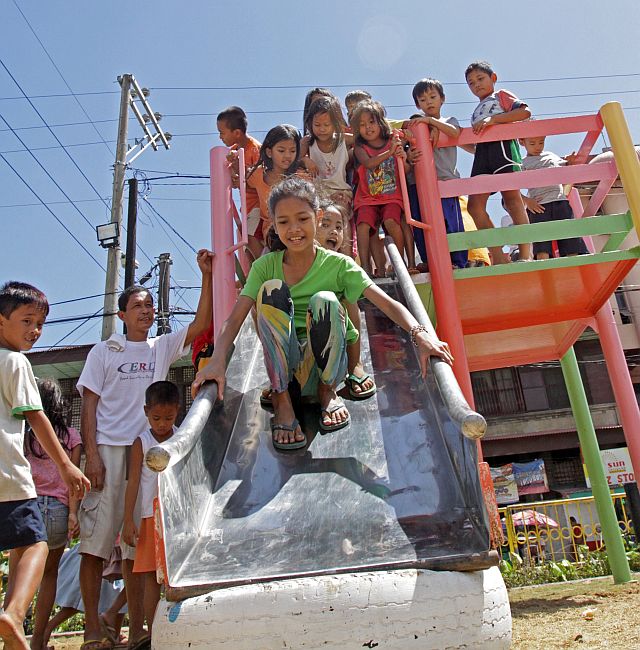 Pasil children have a grand time trying out the slides in the newly opened playground. (CDN PHOTO/LITO TECSON)

The smell of fish and the noise of vendors have been replaced by green grass, pastel colored swings, slides and monkey bars in what used to be the Pasil Fish Market site.

The 3,000-square-meter lot fronting the San Nicolas Parish church where the market once stood was converted into a children’s playground.

Recycled tires were fashioned into birds, elephants and even cartoon characters like Johnny Bravo and Tweety Bird.

The only reminder of the Pasil Fish Market is the center walkway, which has been repainted with bright orange, its posts covered with murals by local artists.

Cebu City Mayor Michael Rama said he always wanted to convert the Pasil Fish Market into a playground or a park for children during his first term in 2010.

His critics didn’t support the project, with then-Vice Mayor Joy Young suggesting that he put up a school instead.

The 7.2-magnitude earthquake that destroyed the Pasil market gave Rama the chance to realize his project.

“Now the dream has been completed, and I could never be happier, seeing all of these children getting the recreation center that they deserve,” Rama said during the soft-opening of the playground yesterday.

When the playground opened, 100 children raced to ride the swings and slides and climb on the monkey bars.

Kenneth Carmelita Enriquez, City Planning and Development Office chief, her husband Apollo Enriquez and several private contractors pitched in to make the playground a reality for the children of Barangay Pasil and nearby barangays.

Two public tennis courts are being built behind the playground. Enriquez said these can serve as alternate recreation centers as well.
Once completed, the facility will be operated by the Cebu City Sports Institute.

Edward Hayco, chairperson of the Cebu City Sports Commission (CCSC) that manages the Sports Institute, was tasked by Rama to supervise the playground and ensure the continued development of the area.

Read Next
First phase of CCMC hospital ‘ahead of schedule’