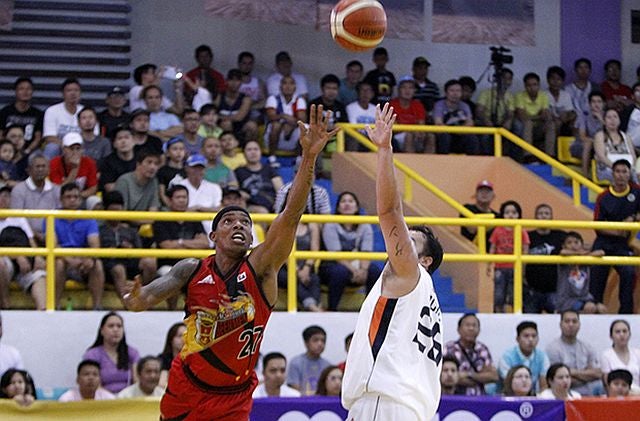 The San Miguel Beermen stretched their winning to three while stopping by far the conference’s longest win streak as they downed the Meralco Bolts, 94-86, in and out-of-town game of the 41st PBA Commissioner’s Cup yesterday in Legazpi, Albay.

Import Tyler Wilkerson picked up three fouls in the opening period but bucked four trouble and went on to finish with 27 points and 10 rebounds in the Beermen’s third victory in four games.

Arinze Onuaku carried most of the load for Meralco, finishing with 26 points and 30 rebounds. But the monster performance wasn’t enough as the Bolts tasted its first defeat after starting the tournament with five straight victories.

Interestingly, Meralco also racked up five straight wins in last season’s Commissioner’s and it was also San Miguel that snapped the streak.

Meralco got a huge break when Wilkerson collected three quick fouls two minutes into the contest.

Wilkerson sat out but San Miguel got a big boost from Espinas, who scored nine points in leading the Beermen to a 19-11 lead.

Wilkerson made for lost time in the second half as he ignited a 10-2 run in the third period, including a three-pointer that gave the Beermen an 84-76 lead with 3:15 to go.

Meralco cut the deficit to four, 82-86, but Kelly Nabong was slapped with a flagrant foul penalty two while trying to stop Fajardo’s lay-up.

Nabong was ejected for the infraction while Fajardo made one of the two technical free throws.

Fajardo then scored on a jumper in the next play that shoved the Beermen to an 89-82 edge with only a minute remaining.

Read Next
Tepora, Tinampay face off in ‘Who’s Next?’ Pro Boxing