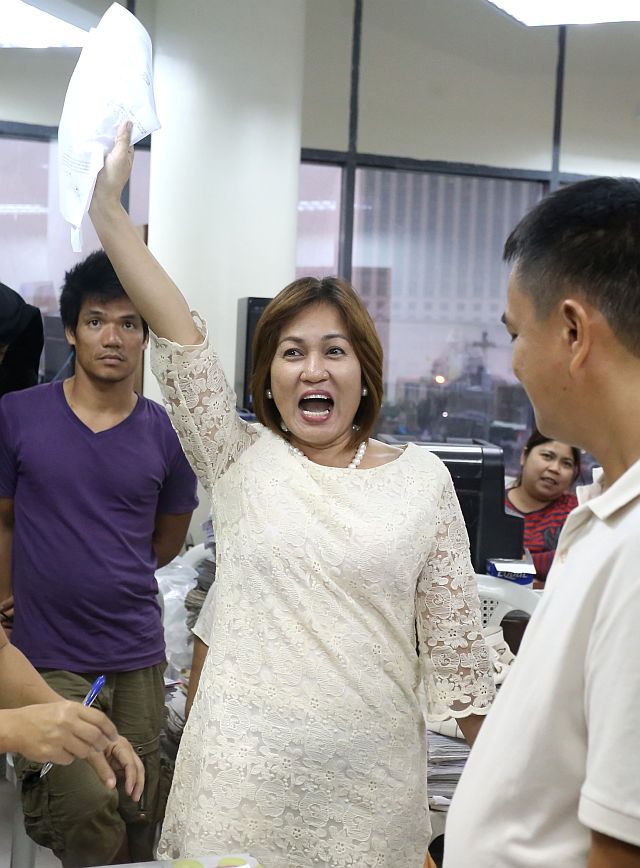 The Philippine National Police intends to throw the book at Assistant Cebu City Prosecutor Mary Ann Castro following a marching order yesterday from Police Director General Ricardo Marquez for them to build an “airtight” case against her.

The police officers from the Regional Special Operations Group (RSOG) are prepared to enter into a legal battle with Castro and have executed affidavits to support the cases they filed against the controversial prosecutor, said  Chief Supt. Manuel Gaerlan, director of the PNP Regional Office in Central Visayas (PRO-7).

The Cebu City Prosecutor’s Office yesterday indicted Castro on two counts of direct assault and a case of malicious mischief.  But the three other cases filed against her by RSOG — grave coercion, grave oral defamation, and resistance and disobedience to persons of authority —  were dismissed for insufficiency of evidence.
Gaerlan, however, said they also intend to file a still unspecified administrative case against Castro before the Department of Justice (DOJ).

The RSOG policemen likewise vowed not to enter into any form of settlement with Castro as they stand by their position that they made a valid arrest despite the claim of Castro to the contrary,  added Senior Supt. Rey Lyndon Lawas, deputy regional director for operation of PRO-7.

Gaerlan said the RSOG policemen, whom Castro accused of maltreatment and harassment, would receive full legal backing from the PNP.

“I have directed my staff to provide the necessary legal assistance (to the RSOG policemen). We expect this will be a prolonged legal battle considering that we filed a case against a prosecutor. She will get back at our personnel,”  Gaerlan told reporters yesterday.

Castro was  freed yesterday after posting a P24,000 bail approved by Judge Francisco Seville of the Municipal Trial Court in Cities Branch 7 in Cebu City.

“I am free! I am finally free!” was her ecstatic cry as she raised the papers declaring she was going to be released on bail.

“My arresting officers will sorely miss me,” she quipped shortly after she was released.

However, her six co-accused, who claimed they were merely dragged by Castro to accompany her to the RSOG office on Monday night without knowing they were barging into a police office, remained in jail as they failed to complete the bail-posting process yesterday, supposedly to be paid for by Castro.

Castro was arrested along with her six companions on Monday night after she barged into the RSOG office inside Camp Sergio Osmeña and went berserk after the policemen refused to turn over to her custody Maricel Gregory,  the long time live-in partner of her estranged husband, Leodegreco “Greco” Sanchez.

Sanchez is the son of the late Cebu Vice Gov. Gregorio Sanchez and brother of incumbent and reelectionist  Provincial Board Member  Grecilda “Gigi” Sanchez-Zaballero.

Castro married Greco in an Islamic wedding in August last year but their union was short-lived as they separated only after two months.

Soon after, the estranged couple filed cases against each other over ownership of a sports utility vehicle. By then Greco was said to have resumed his relationship with Gregory, with whom he has two sons — aged 4 and 2. Gregory is now four months pregnant with Greco’s child.

Gregory was at the RSOG office on Monday night where she surrendered after she learned that a warrant for her arrest was issued by a Regional Trial Court in Talisay City for the online libel cases filed against her by Castro.

Castro allegedly erupted into a rage after seeing Gregory inside the RSOG office and made a grab for her hair. She and her companion destroyed the padlock of the RSOG office when Gregory ran to hide.

The policemen who tried to pacify her claimed they were kicked and hit, while one of them was bitten in the arm by Castro.  This forced the police to put Castro and her companions on handcuffs.

The filing of charges in court against Castro and his six alleged cohorts, meanwhile, caused the dismissal of the petition for habeas corpus that was filed by Castro against the policemen and which was heard by another judge yesterday afternoon.

Castro said her neighbors at Azienda Milan in Talisay City and friends from Toledo City and Pinamungahan town raised money for the bail bond of the other suspects. They, however, failed to put up bail yesterday due to time constraints.

At past 10 a.m. yesterday, while Castro was at the Cebu City Prosecutors’ Office for an inquest proceedings, she opted to stay at her office and even held a press conference.

Castro, clad in a white long-sleeved cocktail dress, a pearl necklace, and a pair of pearl earrings, had a confrontation with two female policemen when she refused to be handcuffed. The two police officers wrestled with Castro and held her arm but managed to put the handcuff only on Castro’s left wrist.  Castro again cried harassment and demanded that she be given “ the dignity of being an officer of the court.”

Castro prevailed. Prosecutor Simaco Labata, to whom the cases against Castro was assigned, ordered the police not to handcuff Castro, noting she was not likely going to escape.

While waiting for the resolution of the charges, Castro opted to stay inside her office but was guarded by the police. She even exchanged jokes with the arresting officers and some colleagues at the prosecutors’ office.

Labata, in a resolution he released at 3 p.m. and approved by Cebu City Prosecutor Liceria Lofranco-Rabillas, found sufficient basis to indict Castro on charges of direct assault and malicious mischief only.

“The records would show that it was only when respondents led by Prosecutor Castro destroyed the door of the room where Gregory was situated that respondents were arrested by the police officers,” Labata said. “Respondents attacked, employed force, and seriously disobeyed the arresting officers which resulted to the injury to (two police officers). Clearly, these acts allegedly committed constitute the crime of direct assault,” he added.

Castro said she will file charges against the policemen who allegedly harassed her.

Asked if she would now want to let go of Greco and entrust the latter to Gregory, Sanchez sang a line of a song that goes “. . . Even if the sun refused to shine, even if romance ran out of rhyme, you would still have my heart until the end of time.”

But Castro was unforgiving to her estranged sister-in-law, Sanchez-Zaballero, whom she accused to be the “unseen hand” behind the RSOG supposedly giving protection to Gregory.

Zaballero, who had previously faced a libel suit filed by Castro but was dismissed by the court last January, denied she helped Gregory seek refuge at the RSOG office.

Zaballero said she was preoccupied on Monday as she was attending a Liberal Party event in Manila with Gov. Hilario Davide III and Vice Gov. Agnes Magpale.

Zaballero said Gregory, whom she described as her brother’s common-law wife, called her on the night of the incident and told her that Castro allegedly mauled her.

It was also only then that she learned that  Gregory was with the police, she added.

Castro had claimed that while at the RSOG office, she heard Gregory talking to someone on the phone and saying, “Ate Gi, naa lagi si fiscal diri (Ate Gigi, the fiscal is here).”