The day they all stood to welcome their VIP 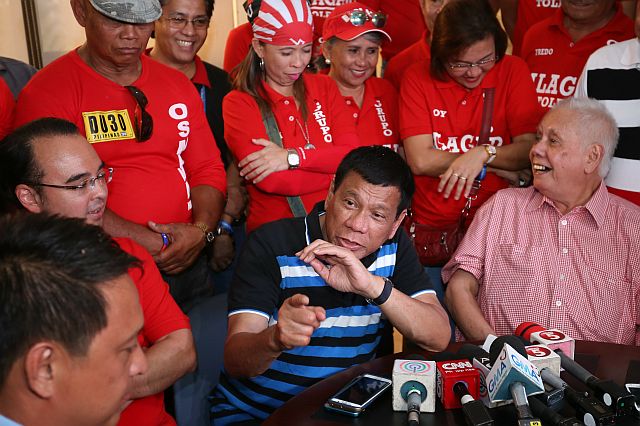 When presidential candidate Rodrigo Duterte walked into the Toledo City Hall past noon of Saturday,  he was greeted by a crowd of supporters in the office of Toledo City Mayor John Henry “Sonny” Osmeña.  It came as no surprise as Osmeña and his loyal supporters had eagerly prepared for the event days before.

From  the Naga-Uling Road to Toledo City, which is a good 14 kilometers, stretches of Duterte posters set up by Osmeña’s campaigners lined the highway to herald the much-awaited political event.

For days, the Duterte fever at the Toledo City Hall seemed unstoppable even while rival presidential candidate Jejomar Binay  was just in the city last Tuesday for a motorcade and rally held to kick-off Mayor Osmeña’s campaign.

Four days after that rally with Binay, Duterte entered a room full of local candidates who had earlier perfunctorily stood on the same stage as the Vice President.  As soon as Duterte emerged,  Osmeña allies stood up in unison to welcome their real VIP while eager to shake his hand.

Later,  the local candidates wagged their wrists to show off red and blue ballers bearing Duterte’s name which they proudly wore.

To those around, it was unmistakably a clear declaration of support for Duterte by all candidates of Osmeña’s party.

In a talk with Cebu Daily News, Risa Rafols, sister of the late Toledo City Councilor Ricardo Rafols, who is now a candidate for councilor, explained that she was there because she admires Duterte’s platform against illegal drugs and is worried for the future of her children who are all boys.

“I don’t want it to happen to my children. Drugs have affected the lives of the youth globally,” said Rafols.

Meanwhile, Rolly Caburnay, another member of Osmeña’s slate, said that he wants a president who is Bisaya.

“I am campaigning for him in all 38 barangays,” he told CDN.   Caburnay was the president of the Toledo City Association of Barangay Captains (ABC) from 1995 to 1997.

Victoria “Tata” Corominas, a candidate for the Cebu Provincial Board representing the third district, is also supporting Duterte.

“I haven’t seen a leader like him. My decision for president has been supported by my family,” Corominas said.

Earlier this week, Corominas refused to share the stage with Binay, even while her other party mates were on stage.

“I am supporting Mayor Osmeña but not Binay,” she said.

Sought for comment on the full support Duterte was getting from his own slate, Osmeña simply answered: “I respect their decision.”
Toledo City has 103, 658 registered voters.

In Talisay City, the Duterte campaign has gained a new supporter in another mayoralty candidate.

In an interview with CDN yesterday, Villarante said that his decision to support Duterte stems from his belief in the leadership of One Cebu party gubernatorial candidate Winston Garcia even if it means being expelled from his party.

Read Next
Lolypop kicks off campaign trail with motorcade