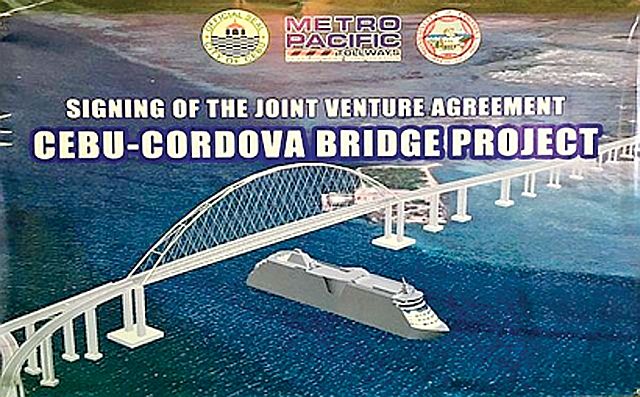 The Cebu Provincial Board (PB) has given its go signal for the P27-billion Cebu-Cordova Bridge Project, the proposed third span that will link mainland Cebu to Mactan Island.

During its regular session yesterday, the board approved a committee report authored by PB Member Christopher Baricuatro that confirmed the approval of the Joint Venture Agreement (JVA) between the Cordova municipal government and the Metro Pacific Tollways Development Corp. (MPTDC) for the project.

“We have already given the go signal,” said Baricuatro, chairman of the PB committee on public works, highways and infrastructure.

The 8.25-kilometer bridge, which will connect mainland Cebu, via Cebu City, to Mactan Island through Cordova town, is proposed to start construction in the third quarter of 2017 and to be completed by 2020.

Cebu City, through the city council, has also given its approval to the project earlier. The council, on March 18, authorized Mayor Michael Rama to sign the JVA with MPTDC for the Cebu-Cordova Bridge Project, allowing the Manuel Pangilinan-led company to start working on the regulatory requirements.

Baricuatro, in his two-page report, said that the power of local government units to enter into joint ventures is provided in the Local Government Code.

He said that the LGU’s discretion is consistent with the state policy of local autonomy and is in line with the operative principles of decentralization, subject to certain limitations imposed by the Code itself or by any other applicable law.

The municipality of Cordova adopted its Public-Private Partnership Ordinance in 2014 which includes joint ventures as one of its modalities, giving it full autonomy in the exercise of its propriety functions.

“Clearly, the municipality may enter into joint venture agreements for the financing, design, construction, implementation, operation and maintenance of the Cebu-Cordova Bridge Project following the requirements, procedures and conditions set forth in its duly enacted ordinance,” Baricuatro said.

The municipal ordinance confirming the JVA with MPTDC was referred to the PB last April 6.

Vice Gov. Agnes Magpale said that they have already done their part. The parties still need to secure an Environmental Compliance Certificate (ECC) and clearances from the toll regulatory board and Philippine Reclamation Authority, among others.

“We could have passed it without hearing their presentation. In fairness to Cordova, it has been at the committee level for some time. We cannot keep it there,” she said in a later interview.

The invitation to appear was filed by Mayor Sitoy’s son, PB Member Arleigh Sitoy, but he was absent during yesterday’s session.
Magpale said she received his letter asking for a leave of absence only yesterday morning.

“Everybody had the chance to ask questions, including Arleigh, and he knew that they were coming because he was informed,” said Magpale.

Cebu Daily News tried reaching PB Member Sitoy for comment, but he would not respond to texts or calls.

The Cebu City government and Cordova municipal government signed the JVA with MPTDC last April 14, but an hour apart.
Cordova broke ground for the project in January 2015, with Mayor Sitoy suggesting that the third bridge be named in honor of the Sto. Niño.