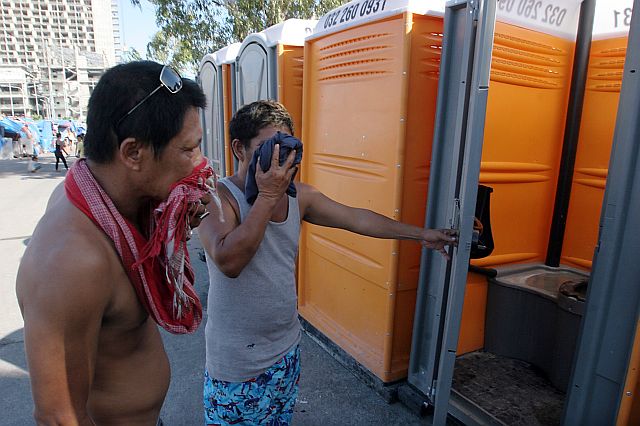 Elizabeth Desuasido would walk five to 10 minutes to a nearby Centro police precinct to relieve herself rather than use the portalets or portable toilets used by 2,200 families inside the Cebu International Convention Center (CICC) grounds.

For her three kids, Desuasido said she bought “arinola” or a chamber pot for them to use.

The fire victims of Barangays Guizo and Mantuyong in Mandaue City, who are allowed to stay on the grounds of the CICC, will have to go to nearby malls, church and police precincts just to use toilets.

Desuasido said the portalets are so dirty she cannot stand to use any of them.

Another fire victim, 36-year-old Gina Arnella, said her family had to adjust staying near the portalets.

She said the Mandaue City government takes one to three weeks to clean up the portalets.

“Dugay kaayo makuha. Daghan kaayo og langaw mahadlok pud ko sa kahimtang sa akong mga anak (The government took so long to dispose of the wastes in the portalets. Flies are everywhere and I’m afraid for the health of my children),” she said.

She said contrary to reports, the DPS spends P2 million just to clean the portalets every two days.

She said the families should cooperate for their own good.

“They won’t cooperate. It’s expensive to clean up the portalets,” Cabigas said.

Read Next
One Cebu files plaint against gov at Ombud