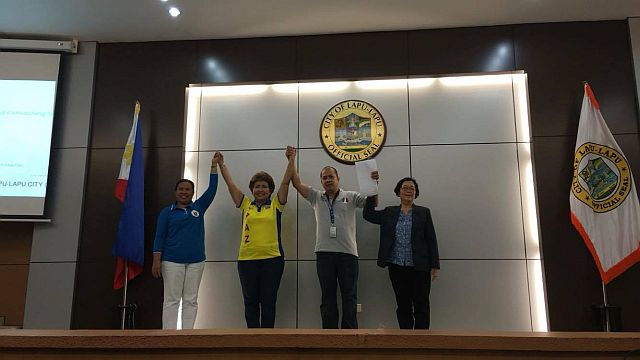 But his proclamation as winner has been put on hold. The Provincial Board of Canvassers will decide after lunch today on the pre-proclaimation protest of defeated candidate Paulus Mariae Cañete.

On her social media account, Ouano-Dizon posted a message thanking her family, supporters, staff and her slate for their effort and support during the campaign.

“To my beloved Mandauehanons, I’m very sorry that I am unable to give you what you were hoping and dreaming for. I pray that God bless you and keep you safe always,” her post read.

Quisumbing won with 85,433 votes against the 65,055 votes garnered by Dizon, daughter of the late Mandaue City mayor Teddy Ouano, or a margin of more than 20,000 votes.

Quisumbing and Fortuna ran under the Liberal Party (LP) Cebu chapter while Ouano-Dizon and Andaya ran under One Cebu.

Seven of the 10 winning council candidates are with LP while the three others were One Cebu members.

In Lapu-Lapu City, it was a clean sweep for Mayor Paz Radaza and her slate who were proclaimed winners by the City Board of Canvassers at 5:45 a.m. yesterday.

Mayor Radaza won with 83,330 votes against Lando Patalinjug of PDP-Laban who received 41,291 votes.

Her daughter, lone Lapu-Lapu City Rep. Aileen Radaza was reelected to a second term with 86,069 votes against PDP-Laban’s Celsi Sitoy with 33,043 votes.

Read Next
Gica calls for unity after winning against Garcia