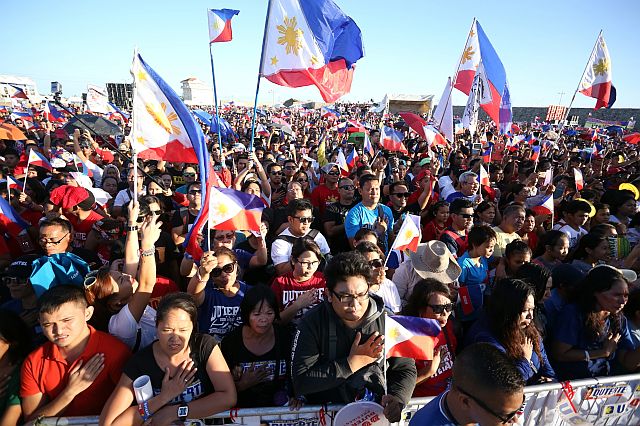 CEBUANO SUPPORTERS of Davao City Mayor Rodrigo Duterte, about 40,000 of them, took part in a Miting de Avance held at the South Road Properties on May 7 where they sang the national anthem simultaneous with other supporters holding rallies in Manila and Davao. (CDN PHOTO/LITO TECSON)

What worked for Liberal Party’s (LP) Mar Roxas in Cebu during his 2010 vice presidential run failed to dazzle Cebuanos this time around in his bid for the presidency, as years of corruption allegations against the Aquino administration besmirched the so-called “Cory magic” that worked wonders for Mar and his running mate then, Benigno “Noynoy” Aquino III.

Results of Monday’s polls show that the “magic” of Cory and an Aquino endorsement have lost their potency in Cebu more so when pitted against the charm and swagger of a Bisaya.

As of 5:20 p.m. yesterday, official results of the canvassing from 47 out of 51 towns and cities in Cebu showed frontrunner Rodrigo Duterte (PDP-Laban) garnering almost double the votes of Roxas at 738,487 against the latter’s 443,661.

And while Roxas won with close to 1.1 million votes in practically all towns and cities in Cebu during the vice presidential race of 2010, Duterte already gained more than that number based on the unofficial Commission on Elections (Comelec)-GMA mirror server partial tally of Election Returns (ERs) yesterday which placed Duterte’s running total at 1,123,705 votes in Cebu province against Roxas’s 578,811 with 97.74% of ERs counted.

Vice Governor-elect Agnes Magpale(LP) said they would have wanted Roxas to win the presidency. But she said LP leaders in Cebu are willing to work with Duterte.

“It’s sad that Mar lost. But the people have spoken,” Magpale said in an interview shortly before she was proclaimed winner of the vice gubernatorial race at the Provincial Canvassing Center at the Capitol Social Hall last night.

Asked why Duterte won by a huge margin in Cebu, Magpale said, “Duterte is just a phenomenon. We can’t explain it.”

“That will be a wonderful tandem so to speak. Duterte is a Bisaya, too. And I don’t think he will do something disadvantageous to Cebu,” she said.
Rep. Gwen Garcia (One Cebu) had expected Cebuanos to go all out for Duterte.

“Ang kasing-kasing sa Bisaya adto gayud laban sa isigka-Bisaya (The heart of a Bisaya will always go for another Bisaya),” she told reporters at the canvassing center after gaining a fresh mandate from voters in Cebu’s third congressional district.

“People are looking for performance, not words. And Davao City speaks volumes of what he (Duterte) has done. We look forward to a Duterte presidency that has a clear and decisive action against illegal drugs, criminality, and corruption,” said Garcia whose One Cebu Party supported Duterte’s presidential campaign.

“Cebuanos are intelligent voters. They go for candidates who have shown concrete actions, not slogans like ‘tuwid na daan’ (straight path) which in reality, is ‘tuwad’ (crooked),” she added.

“That is expected. Aside from his being a Bisaya, Duterte has captured the hearts of many Cebuanos in his fight against illegal drugs, criminality, and corruption. We’re very happy for what Duterte has achieved. And I thank the Cebuanos who voted for him,” he told the CDN.

But while the LP-trusted “Cory magic” and mantra “Daang Matuwid” failed to woo more votes in Cebu against the pure charisma of a stereotypical street smart Bisaya, with a brand of humor that resonates among the Cebuano masses, Cebu’s decades-old anti-Marcos sentiment resurfaced last Monday based on the dismal performance of Marcos at the polls last Monday.

Official Comelec results tallied as of 5:20 p.m. yesterday showed Marcos only getting 190,564 votes in the vice presidential race against frontrunner Leni Robredo (LP) who garnered the highest number of votes in Cebu with 570,350. The results came from 47 out of 51 towns and cities in Cebu.

Lawyer Democrito Barcenas, head of the Cebu Volunteers for Mar and Leni Robredo, explained that Cebuanos were attracted to Duterte’s promise to curb crimes but more than that, they voted for him because he is a Bisaya who traced his roots in Cebu and whose father was born and raised in Danao City, the economic center of Cebu’s fifth district dominated by the powerful Durano political clan.

Duterte is a relative of the Duranos.

In an announcement made through a message published on his Facebook page, Garcia said that he respects the will of the people.
“To be the Governor of Cebu today is not in God’s plan. I congratulate Governor Davide on his victory. I congratulate his supporters, and his campaign,” he said.

“I wish him and his family the best. I urge all the Cebuanos to join me not just in congratulating him but in uniting behind the Governor, to find the necessary compromises, to bridge our differences, and leave our children and grandchildren a better Cebu than we inherited.”

Winston also thanked the One Cebu party, his running mate Nerissa Soon-Ruiz, his family and the “571,375 (partial and unofficial results) Cebuanos who came out to support and vote for me.”

“This campaign has been about progressive visions and ideas for a better Cebu which have resonated with all of you. This has been a great election and it has been an honor and I feel blessed to have met so many of you. We vote as many, but we pray as one,” said Winston.

When Members of the Provincial Board of Canvassers (PBC) decided to go on recess at 7 p.m., Davide already garnered 594,273 votes compared to Garcia’s 578,912.

The recess was called after the PBC proclaimed Sun Shimura and Raci Franco as winners in the race for the fourth district Cebu Provincial Board.

Acting Cebu Elections Supervisor Eliseo Labaria said they could not proclaim the winner for governor yet since they were still waiting for the results of the canvassing in the towns of Malabuyoc in the southwest, Santander in the south, and Cordova town in the sixth district.

Canvass was unable to start in Malabuyoc and Santander towns because of problems with their Consolidated Canvassing System (CCS), while election winners in Cordova town could not be proclaimed because of a pending petition filed by a candidate for councilor asking Comelec to allow about 400 voters from Barangay Gabi in Cordova town to vote.

Labaria said that election results from the three towns may still affect the standing of the candidates for governor.

Labaria said they already informed their central office about the condition of the CCS in the three towns.

He said replacements may arrive today so that they can resume the transmission.

The provincial board of canvassers is set to reconvene at 10 a.m. today and expects to declare the winner for governor.

In the race for vice governor, Magpale won over Soon-Ruiz by a margin of 209,317 votes.

Two other brothers of Gwen, Pablo John or “PJ” and Nelson lost their bids for the seventh district congressman and mayor of Dumanjug town, respectively. A cousin, Antonio Garcia also didn’t make it to the Dumanjug town council. Another cousin, Alvin Garcia, lost in his congressional bid in Cebu City’s north district.

“PJ” lost to Peter John Calderon, trailing behind by 14,605 votes with only one town with 12,814 votes left to transmit.

In an interview, Garcia described her win for this election as a “complete reversal of her first term.”

In the fourth district, Rep. Benhur Salimbangon got reelected for his third and last term. He garnered 135,437 votes against the 86,836 votes of Bogo City Mayor Celestino “Junie” Martinez Jr.