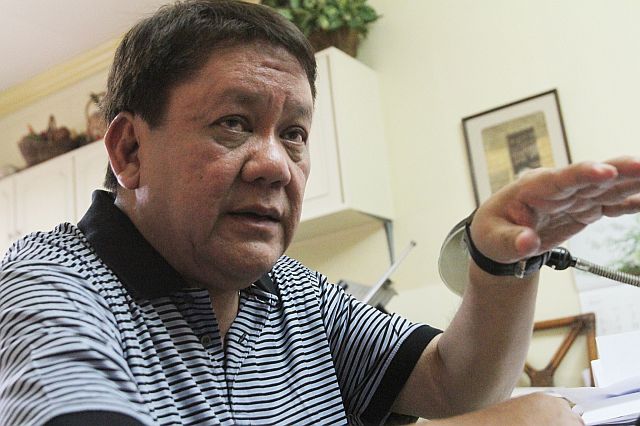 Less than two days after he was proclaimed as winner, Cebu City Mayor-elect Tomas Osmeña has managed to spark a contentious debate by saying he will revoke last year’s sale of a couple of lots at the South Road Properties (SRP) to Manila-based property developers.

In a press conference yesterday, Osmeña said the sale of a 26-hectare consolidated property to the SM-Ayala consortium and a 19-hectare lot to Filinvest Land Inc. was “highly dubious, if not corrupt.”

Osmeña also said he planned to remove City Treasurer Diwa Cuevas once he assumes office. Plans for an SRP Phase II, which he promised during his campaign, would not push through because he didn’t get a full ticket in the council, he added.

Osmeña’s pronouncement raised the eyebrows of some city officials, including reelected Vice Mayor Edgardo Labella, who pointed out that Notices of Award have been issued to the developers, a downpayment of P8.35 billion has been made and a Deed of Sale on installment basis has been signed.

“Considering that the sale and the contracts have been consummated, it is not that easy to have that rescinded. It was already agreed upon based on the Deed of Sale on installment. There was a meeting of minds. There could be very serious legal ramifications (if he pushes through with the plan),” Labella said in a phone interview.

Another Team Rama ally, Councilor Gerardo Carillo, said it would be difficult to block the sale of the SRP lots.

Both Labella and Carillo said Osmeña would have to get the approval of the Council, which will be dominated by Team Rama by July 1.

Well aware that he would be up against corporate giants that can afford to hire a battery of lawyers to defend their interests, Osmeña said he would push for a referendum to determine the sentiments of the city’s constituents and use the results as basis for his move all the way to the Supreme Court.

“Technically, it’s legal (to form a consortium). But that is detestable. We are not talking about 200 square meters. We are talking about a transaction involving P16 billion and I think the people should have a say because I’m accusing all of them, including Rama, of connivance in pushing this through,” he said.

SM Prime, Ayala Land and Cebu Holdings had formed a consortium to make the lone bid of P10.009 billion for the 26-hectare Lot No. 8-B-1, where the Calungsod templete stands.

Filinvest, on the other hand, won the bidding for a 19.2-hectare lot with an offer of P6.758 billion against the P4.21-billion bid of JG Summit Holdings, Inc.

The transaction generated a total of P16.7 billion for the city government. 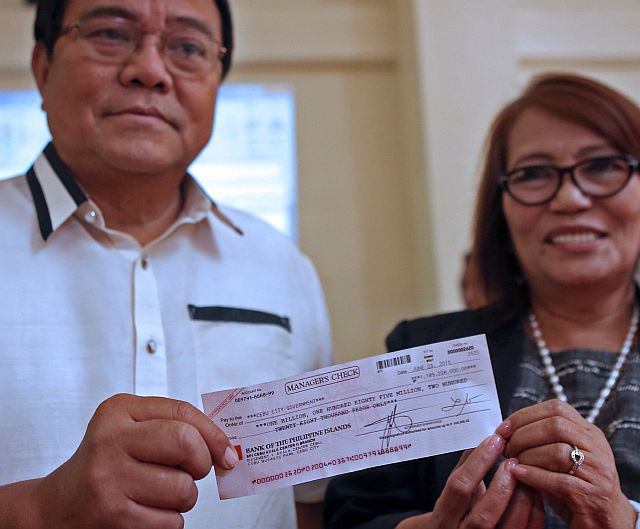 Cebu City Vice Mayor Edgar Labella together with Cebu City Treasurer Diwa Cuevas showed in this file photo the check for P1 billion as security bid bond for SRP lot 8-B-1 after the bidding in June 2015. (FILE PHOTO)

Osmeña alleged there was a “monopoly” during the public bidding conducted on June 30 last year.

Without any other bidders, he said the SM-Ayala consortium ended up dictating the amount of the lot they wanted to acquire.

Immediately after the bidding, SM-Ayala turned over a P1-billion check as 10-percent security bid bond while Filinvest issued a P670-million check.

These formed part of the 50-percent downpayment for the lots.

Cebu City Mayor Michael Rama received the rest of the downpayment from the developers in August last year. The balance would be paid on installment basis within three years based on the Terms of Reference (TOR) for the sale.

Asked if he would return the downpayment, Osmeña said he would look into it, but warned that City Hall would be bankrupt.

“That’s not an important discussion at this point in time because we can always work it out,” he told reporters.

He said he planned to sell a 1.5-hectare lot in the SRP in Pond F near the Il Corso mall of Filinvest to generate revenues for the city. He did not elaborate.

Rama, who has questioned Osmeña’s proclamation as winner, said he still had to discuss the issue with the Team Rama councilors.

“He may be proclaimed, but he’s too in a hurry even if he has robbed my votes. He robbed the people’s votes. He better shut up his mouth! He hasn’t officially assumed,” Rama said in a phone interview.

“How can I be conniving when it was a public bidding? He just wants to do something again,” he added.

Osmeña said he would continue to explain the SRP lot issue to Cebu City residents, but had no plans of meeting representatives of SM-Ayala consortium and Filinvest.

SM and Filinvest invested in the SRP with the assistance of the defunct Cebu Investment Promotions Center, a privately led agency backed by Osmeña.

SM is developing a 30-hectare lifestyle complex called the SM Seaside Cebu complex, with a huge mall as centerpiece, while Filinvest is undertaking a mixed-use 50-hectare development partly through a joint venture with the city government.

Representatives of SM and Ayala refused to comment on Osmeña’s pronouncement yesterday.

“We have no direct information on the matter and we cannot comment as of this time,” said Cebu Holdings, Inc. corporate communications manager Jeanette Japzon.

SM Prime Holdings, Inc. Vice President Marissa Fernan contacted the legal department in the Manila head office and was advised that they had “no comment at the moment.”

With regards to the SRP loan, Osmeña said there was no urgent need nor was there a demand for full payment.

He said his incoming administration would continue to pay the yearly amortization of around P500 million even without the revenues from the sale of the SRP lots, which he said he had done during his previous terms.

“I could pay that without dividend of the SRP. I did it for about five to six years. Now, he (Rama) cannot even do that,” he said.

Read Next
The fate of LP in Cebu