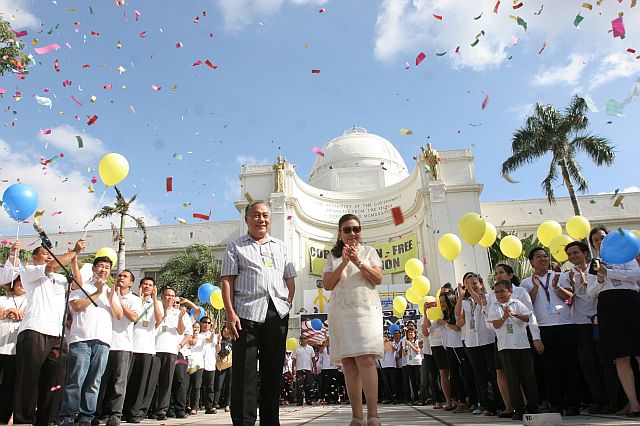 There will be changes at the Capitol, even if its top leaders remain the same.

Reelected Gov. Hilario Davide warned Capitol employees during the flag-raising ceremony yesterday that the policies will remain the same “but if you cannot change your bad habits, you better change your habitat.”

With new members in the Provincial Board, Davide and reelected Vice Gov. Agnes Magpale urged the employees to give their support and cooperation for the improvement of services.

“I expect all the best from you. Let’s continue to serve our constituents with utmost efficiency and accountability,” Davide said in his speech.

“There is work to be done. Padayon ra gihapon ta. Amo ra gihapong ipadayon ang wala pa mahuman. (We will continue what has not yet been finished.) Nothing has really changed, except at the Capitol. We have just been given a fresh mandate and we will work harder. We have to be more efficient especially at the Capitol.”

Provincial Administrator Mark Tolentino has passed a courtesy resignation for signature by the department heads. But he stressed that it was not mandatory but rather, voluntary in nature.

“Nobody is being forced to tender anything. It was only a suggestion,” Tolentino added.

So far, those who have tendered their courtesy resignations are Tolentino,, Baltazar Tribunalo Jr., head of the Provincial Disaster Risk Reduction and

At the legislative department, Vice Gov. Magpale wants to ensure a proper turnover of responsibilities before the new members of the Provincial Board will assume.

Magpale, presiding officer of the PB, met with the board yesterday to discuss plans for a send-off party for outgoing members as well as the inaugural session in July.

“In the coming weeks, we will be busy. Also, I am consulting with the new board for committee assignments. We haven’t really started formal discussions, but there have been manifestations from old members that they want to handle this or that,” she told reporters after the board’s regular session yesterday.

Magpale said the inaugural session will be held on July 4, Monday.

“The send-off party will most likely happen on the last session day for the old board (members) so we’ll have a proper turnover. That didn’t happen in 2013. There should be a smooth turnover,” she said.

The vice governor will call for a separate meeting with the new board members as well.

“I don’t think there will be a problem. The governor has been treating all the board members (fairly) in the past. Based on what happened in 2013, I saw his direction. I anticipated that even now, it will be the same,” the vice governor added.

In previous interviews, some of the newly elected board members expressed interest in handling committees.

Galeos said he wants to be assigned to a committee where he can use his expertise as a civil engineer. Salvador, a registered nurse, on the other hand, said he would like to handle the committee on health.

Ouano, businessman son of the late board member Teddy Ouano, said he plans to establish an online job search platform during his term as legislator.

Magpale said they will also try find out how they will address the remaining unresolved complaints lodged before the PB Committee on Complaints and Investigation.

As of February this year, the committee has yet to resolve around 30 administrative cases from various component towns and cities in Cebu.

The board temporarily deferred action on these pending cases because of the 90-day ban on administrative disciplinary proceedings against elected local officials which started in the same month and is in effect until June 8 this year.

The committee is presently chaired by Sanchez, who ran and lost to Gwendolyn Garcia when she challenged her for the third district congressional seat. It was passed on to her by Sitoy, who also lost the Cordova mayoralty to his sister Teche Sitoy-Cho.

Read Next
PRO-7 Chief Comendador: Dumpit would be asset to PNP