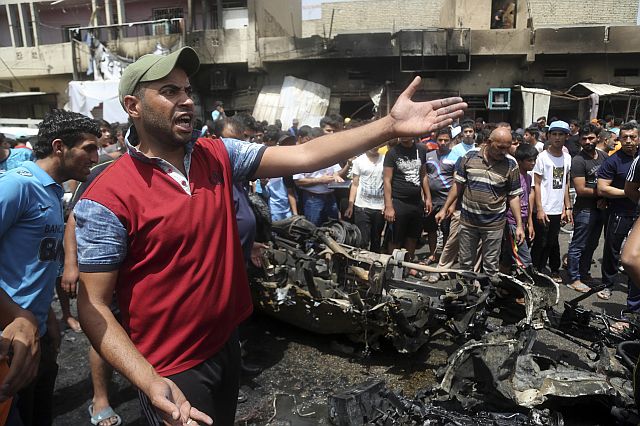 Citizens gather at the scene of a car bomb explosion at a crowded outdoor market in the Iraqi capital’s eastern district of Sadr City, Baghdad. (AP)

Baghdad — A wave of bombings struck outdoor markets in Shiite-dominated neighborhoods of Baghdad on Tuesday, killing at least 36 people, officials said — the latest in deadly militant attacks far from the front lines in the country’s north and west where Iraqi forces are battling the Islamic State group.

No one immediately claimed responsibility for the attack, though it bore the hallmarks of the extremist IS group, which has been behind recent deadly attacks in the Iraqi capital and beyond. Since its blitz in the summer of 2014, IS has controlled significant areas in northern and western Iraq, including the country’s second-largest city of Mosul.

The deadliest bombing on Tuesday took place in Baghdad’s northeastern Shaab neighborhood, where at least 28 people died and 65 others were wounded.

A roadside bomb first exploded outside the concrete blast walls surrounding the open-air market, followed by a suicide bomber who blew himself up as people gathered to help the victims of the first explosion, a police officer said.

A bit later, a car bombing struck a fruit-and-vegetable market in the Shiite-dominated neighborhood of Dora, in southern Baghdad, killing eight people and wounding 22 others, another police officer said.

Medical officials confirmed the casualty figures. All officials spoke on condition of anonymity as they were not authorized to talk to reporters.

Commercial and public places in Shiite-dominated areas are among the most frequent targets for the Sunni militants seeking to undermine the Iraqi government efforts to maintain security inside the capital.

But the Islamic State has not confined its latest attacks only to Baghdad.

Sunday’s spectacular attack in the town of Taji, about 20 kilometers north of Baghdad, saw a suicide car bombing at the facility’s main gate, followed by several IS fighters breaking into the plant where they clashed with security forces for hours before the attackers were repelled.

The dead included six civilians and eight security forces while 27 Iraqi troops were wounded. Closed-circuit television images showed an explosion that sent thick black smoke rising above the plant. As flames engulfed the facility and nearby palm trees, pedestrians were seen running for cover. The top of one of the gas-processing units was blown off.

Read Next
The Netherlands jails’ accommodate asylum-seekers as prisoners decline