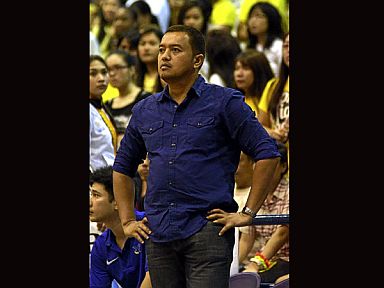 Speaking just moments after his team wrapped up practice on Wednesday night, Perasol wished to clear the air regarding the arrival of the two new players—a development that all but hampered the build-up of the Cebu-based Green Lancers, the winningest collegiate basketball team in Cebu history.

“I just want to put things in the right perspective. We did not poach players,” Perasol said in Bisaya. “We do not want people to think that UP is just getting players from different programs and not developing their own. As a coach, I also do not want to run over programs that have invested a lot in their players.”

The unforeseen transfer of UV’s two best players has caused an uproar here down south, a seeming déjà vu of last year’s events when Darren Shane Menina, then University of Cebu’s most potent scorer, transferred to the Mapua Cardinals after the NCAA squad’s participation in a pocket tournament here in Cebu.

Perasol said Manzo and Santillan came one day accompanied by current Maroon, Paul Desiderio, and asked if they could join the practices.

While he was already familiar with the 6-foot-4 Santillan who he had already scouted while he was still coaching Ateneo, all he had heard about Manzo were murmurs and whispers of this crafty wonderkid doing damage down south.

But one practice session was all it took to make Perasol a believer.

Still, as much as he wants to have both players to be part of his team, Perasol emphasized the need for the recruitment process to go the right way.

“I’m hoping they can be part of the program but it still has to go through the proper channels. It has to have the go signal from both UP and UV. I’ve already informed our management team headed by Dan Palami that I am very interested in getting these two guys but the challenge now is how to convince UV to let them go. All things being equal, I would want them to be with the Maroons but it would be better if they left with UV’s blessings.”

Read Next
Time to move on for UV